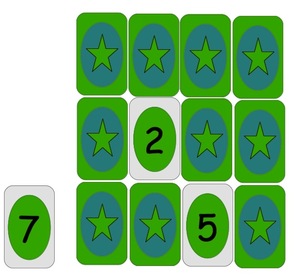 Note: This game was invented by Kiri, a first grader.

Students fully meet the mathematical demands of the no-memory version if they can perform all appropriate addition and subtractions with the target card and exposed cards to check whether there are any matches. Using the inverse relationship between addition and subtraction should be encouraged. For example, if the target card is $3$ and one of the exposed cards is $5$ the students might want to look for any $8$'s exposed, as they recognized that because $3 + 5 = 8$, they will be able to make the number sentence $8 - 5 = 3$.

For the versions which involve memory, the mathematical demands are met if after they flip over one card they can name all possible second cards which could be used to complete a valid number sentence and/or evaluate the possibility of using previously flipped cards which they remember. For example, if the target is $7$, and the first student turns over a $2$ and an $8$, then if the second student turns over a $1$ they should want to recall the location of the $8$ in order to make the number sentence $8 - 1 = 7$.