Grade 3
Domain Operations and Algebraic Thinking
Cluster Solve problems involving the four operations, and identify and explain patterns in arithmetic.
Standard Identify arithmetic patterns (including patterns in the addition table or multiplication table), and explain them using properties of operations. <span class='clarification'>For example, observe that 4 times a number is always even, and explain why 4 times a number can be decomposed into two equal addends.</span>
Task Patterns in the multiplication table 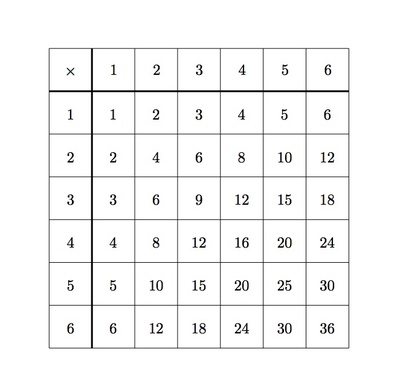 This task is intended for instruction. The goal is to look for structure and identify patterns and then try to find the mathematical explanation for this. This problem examines the ''checkerboard'' pattern of even and odd numbers in a single digit multiplication table. The even numbers in the table are examined in depth using a grade appropriate notion of even, namely the possibility of reaching the number counting by $2$'s or expressing the number as a whole number of pairs.

The multiplication table itself is a little hard to parse because it has so much information in it. The teacher should point out that the first row and first column are not part of the table itself but show what numbers are being multiplied. In general, the students will probably need a lot of help understanding what the task is asking. Students are most likely to benefit if they can work with a partner or in small groups on this task.

Although not requested in the problem, teachers may wish to investigate further why a product of an odd number by another odd number appears to always be odd. We can see why by looking closely at $5 \times 3$ as an example. We can view this, using the distributive property, as

A more sophisticated version of this task is found in "4.OA Identifying Multiples" where the same pattern is considered not only for even and odd numbers but also for multiples of $3$ and $4$.