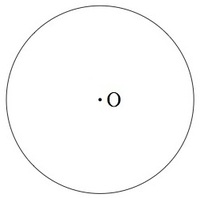 A circle has an infinite number of symmetries. This contrasts with polygons such as the triangles and quadrilaterals considered in 4.G Lines of symmetry for triangles and 4.G Lines of symmetry for quadrilaterals. The circle is, in some sense, the most symmetric two dimensional figure and it is partly for this reason that it is so familiar. Coins, clock faces, wheels, the image of the full moon in the sky: these are all examples of circles which we encounter on a regular basis.

In high school, students should return to this task from two viewpoints: