Grade 5
Domain Number and Operations—Fractions
Cluster Use equivalent fractions as a strategy to add and subtract fractions.
Standard Solve word problems involving addition and subtraction of fractions referring to the same whole, including cases of unlike denominators, e.g., by using visual fraction models or equations to represent the problem. Use benchmark fractions and number sense of fractions to estimate mentally and assess the reasonableness of answers. <span class='clarification'>For example, recognize an incorrect result $2/5 + 1/2 = 3/7$, by observing that $3/7 &lt; 1/2$.</span>
Task Sharing Lunches

This task requires students to think about how a single situation involving fractions can be accurately represented using addition or multiplication.

Students are first asked to draw a picture in part a showing this situation to reinforce the fact that the same situation can be modeled using three different operations. Students are asked to divide two sandwiches into three equal pieces, and must reason what that will look like. Students should be able to realize fairly easily that each student will get $\frac{2}{3}$ of the sandwich, and to model this using in addition in part b. As students' facility with operations on fractions matures, they should not be expected to always draw a picture.

In part c, students are asked to represent the situation using multiplication, and to explain their representation.  Teachers may want to show multiple correct explanations, including interpretations of products as partitions of equal parts, visual displays (such as a number line or fraction diagram), or a mathematical statement such as $\frac23 + \frac23 + \frac23 = 3 \times \frac23 = 2$ If students struggle, the teacher can tell the students to think of the problem as $2$ sandwiches $= 3 \times$ a fraction of a sandwich. A teacher might also want to ask students to demonstrate multiple correct explanations, particularly if they notice students relying only on one method and being confused by others.

Finally, students are asked to consider the meaning of a fraction in part e– that is, the division of a numerator by a denominator. This task reinforces the concept that any fraction can be described as dividing a whole number into the number of pieces specified in the denominator. The explanations that the students produce for each of the three tasks may be slightly different, but will result in the same conclusion (that each student gets $\frac23$ of a sandwich). If students struggled with this concept, the teacher might note that if there were six sandwiches and each person got the same amount, we would use division to determine that each person gets two sandwiches $(6 \div 3 = 2)$. The situation here is the same, except instead of $6$ wholes, the unit is $6$ thirds.

This task was written as part of a collaborative project between Illustrative Mathematics, the Smarter Balanced Digital Library and the Teaching Channel.

Solution: Solution to part A

A. Students should say that each person gets $\frac23$ of one sandwich. The picture could be anything that shows the sandwiches being divided equally three ways.  For example: 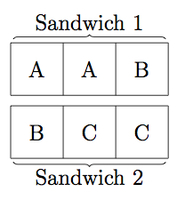 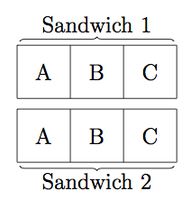 The second solution has a few advantages. First, this type of picture prepares students for the tape diagrams they will see in the sixth grade when they study ratios. Secondly, this method of division into equal parts would apply if, for example, one of the sandwiches were tuna fish and the other was grilled cheese.  Each person would receive an equal part of each type of sandwich. Third, for a more complex fraction such as $\frac{3}{5}$ the equal portions can be seen very readily (without counting) with this type of model.

Solution: Solution to part B