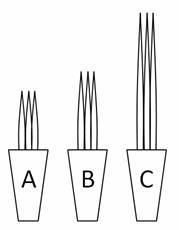 For the sake of this commentary, let $R$ be the height of Rual’s seedlings (of course students do not need to use a letter to represent any number in this task). Student must compare the size of each of two products ($1\frac12 \times R$, and $\frac34 \times R$) to one factor ($R$) on the basis of the other factor without performing any computations. An extension to this problem would be to ask students how many times larger Pablo’s seedlings are than Celina’s.

The wording “$1\frac12$ times as tall” may be a clue to students that multiplication is the relevant operation (i.e., $1\frac12 \times R$ is the height of Pablo’s seedlings). The student should also realize that the phrase “$\frac34$ as tall as” also signals multiplication – in fact, this phrase can be read as “$\frac34$ times as tall as.” In both cases, a scale factor is being specified and students should connect that to the interpretation of multiplication as scaling.

The solution shown below is in adult language. Responses by fifth grade students will vary widely in their level of precision