In a marching band there are 24 trombones and 15 snare drums.

This task should not be students' first encounter with equivalent ratios, but rather, should cap off lots of work with sets of equivalent ratios in many contexts using different representations.

We suggest showing a few minutes of a performance by a large university marching band (there's an example embedded at the bottom of this commentary) before starting this task (or maybe during a short break). Students who participate in band might think some of the quantities given are unrealistic, but some marching bands are quite large. A teacher could take a few minutes to see how many instruments students can identify.

Part (a) is meant to clarify that even though 24:15 and 8:5 are written with different numbers, that they both correctly describe the situation. Using language like "there are 24 trombones for every 15 snare drums" and "there are 8 trombones for every 5 snare drums" can help reinforce this, especially with an appropriately constructed diagram. When experienced practitioners talk about "the ratio," they often automatically assume a reduced form written with the smallest possible whole numbers; but there's nothing about the mathematics that requires this.

Students who have worked with unit rates, especially if they have come to see unit rates as useful, may generate something like $\frac{8}{5}:1$ in part (c) and $\frac{2}{7}:1$ in part (d). This could present an opportunity for a nice conversation about keeping a context in mind when representing quantities (involving aspects of MP2). There's nothing mathematically wrong with saying that $\frac{8}{5}:1$ is a ratio equivalent to the others in part (c), and it may be a good use of time to point out how we can see $\frac{8}{5}:1$ in a diagram. At the same time, we can recognize that it would be impossible for a marching band to contain $\frac{8}{5}$ (a little more than one and a half) trombones.

The solution to part (e) is given in a form that a student might produce. More formally, we might say "Given a ratio $a : b$, an equivalent ratio is any ratio of the form $sa : sb$ where $s$ is a positive number." Students are likely to say "multiply or divide" instead of just "multiply." A teacher might decide to let this go or to take the time to talk about how in math we like to write definitions as simply as possible. Since, for example, dividing by 4 is the same as multiplying by $\frac{1}{4}$, we can get away with just saying "multiply." 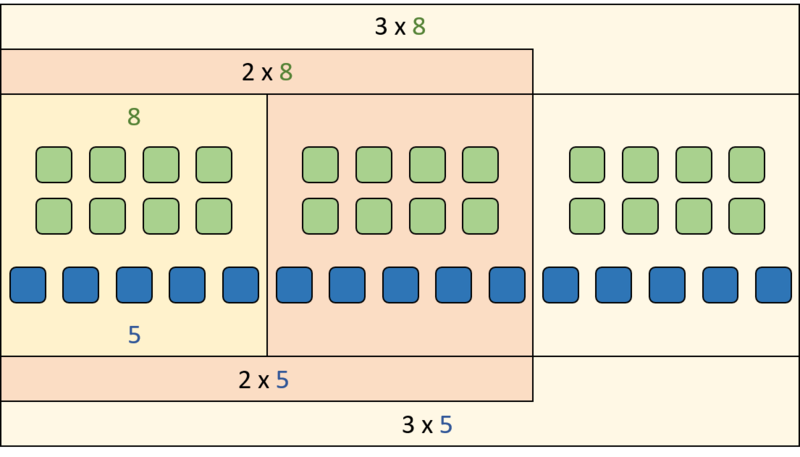 But drawing all those squares is cumbersome! We could choose a different representation; for example, here is a double number line diagram:

In a marching band there are 24 trombones and 15 snare drums.