Grade 7
Domain Ratios and Proportional Relationships
Cluster Analyze proportional relationships and use them to solve real-world and mathematical problems.
Standard Compute unit rates associated with ratios of fractions, including ratios of lengths, areas and other quantities measured in like or different units. <span class='clarification'>For example, if a person walks $1/2$ mile in each $1/4$ hour, compute the unit rate as the complex fraction $\frac{1/2}{1/4}$ miles per hour, equivalently $2$ miles per hour.</span>
Task Cider versus Juice - Variation 1 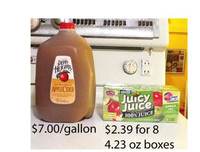 This task asks students to compute multiple unit rates, aligning with standard 7.RP.A.1. The problem also has a real-world context, which requires students to compare two rates in different units in order to reach a conclusion on buying two different products.

There are a couple issues that may need to be addressed as students work through this problem. The first is that not all needed information is given for this task, namely, the conversion rate between gallons and ounces. Instructors can either let students look this up themselves or have it available for them, but ideally students should come to the conclusion themselves that they need to know this conversion rate in order to continue. The second issue is that by "ounces" we mean "fluid ounces". If students struggle with this distinction, it could be a good opportunity to discuss mass versus volume measurements, and how to tell by context which one is appropriate to use. There are 128 fluid ounces in 1 gallon.

Question e could be extended by asking students to compute some or all of the additional unit rates they listed, and to explain how these further support their answer to Question c.