The students in Carli’s class built some solar-powered robots which they raced in the cafeteria of the school.

After the race, Carli drew the graphs shown below to represent the distance $d$, in meters, that each of three robots A, B, and C traveled after $t$ seconds. 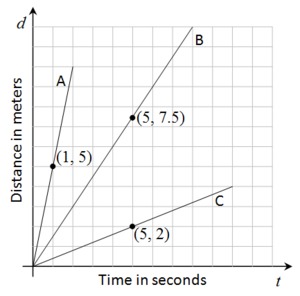 This task is part of a joint project between Student Achievement Partners and Illustrative Mathematics to develop prototype machine-scorable assessment items that test a range of mathematical knowledge and skills described in the CCSSM and begin to signal the focus and coherence of the standards.

This task is part of a set of three assessment tasks for 7.RP.2.

Task 1: Students are introduced to constant speed in 6th grade but they are not asked to interpret graphs that represent objects moving at constant speed until 7th grade. The first option under Part (a) reflects a common student error where they interpret graphs as position graphs even when they aren’t. Correctly interpreting the point on the graph and computing the unit rate are straight-forward applications of the mathematics described in 7.RP.A and comparing the speeds in Part (b) is only slightly more complex.

Task 1: The first task does not assess any of the standards for mathematical practice any more than typical day-to-day mathematical work.

Task 2: The second task addresses several standards for mathematical practice. While it is possible that students have thought about what makes one paint mixture the same shade as another, it is unlikely they have thought about this from a mathematical perspective. Thus, students will need to make sense of the context and choose a mathematical approach to answer the questions given (there are multiple approaches). Most approaches require multiple steps, so students will need to make sense of the problem and persevere in solving it (MP 1). Students solving this task may look for structure (MP 7) by converting all five ratios into unit ratios and then grouping the ratios that have the same unit ratio. Students might also find equivalent ratios with the same amount of one kind of paint or the same total amount of paint. Any solution approach requires students to decontextualize and contextualize (MP 2). The complexity of the item could be lowered by asking Part (b), Part (c), and then Part (a) because it would suggest a solution approach to Part (a). Complexity could be increased by removing Part (c) which helps students choose a solution method for Part (d).

Task 3: The third task also addresses several standards for mathematical practice. Students will have very likely been to the grocery store and bought items that cost a certain price per pound, but it is unlikely they will have seen this kind of information represented graphically outside of math class. Furthermore, the number of different lines represented in the coordinate plane will likely be an unfamiliar setup for students and there are lines that represent relationships that would be difficult to make sense in the context. This means that students will need to decide which lines do make sense and what they mean as well as which ones do not (MP 1). In order to recognize that points C and D correspond to bananas that have the same cost per pound in Part (c), students must reason abstractly and quantitatively (MP 2). This task also taps into students' attention to precision (MP 6) because students need to specify the units in Part (a) and attend carefully to the way the axes are labeled in Part (c).

Task 1: It is difficult to come up with a realistic context that is both familiar to all 7th graders and where objects actually move at a constant speed. The context of racing solar-powered robots will not be familiar to all students, so a brief video clip showing a robot moving at a constant speed removes some of the linguistic complexity introduced by making sense of a verbal description in an unfamiliar context (especially ELL students). The language structure for this task is not very complex.

Task 2: There are three sentences with approximately 50 words. Two of the sentences are simple, and the other is conditional. The first two questions are simple while the third is more complex (29 words). The set up and question in Part D is longer than the stem (approximately 60 words). There are no unfamiliar words in the stem (mixture and represent are Grade 4 words and relate is Grade 6).

Task 3: The linguistic complexity of the first two questions is much lower than the third, which is a much more complex sentence as well as a more complex mathematical request.

Task 1: There is a verbal description of the context and a short video clip meant to decrease the linguistic complexity, although it increases the stimulus complexity. Students have to connect a verbal description of a context to a graphical representation of the relationships described. The racing setup is meant to help motivate the graphical representation of the information, although it increases the complexity in the sense that students could simply be given the graphs.

Task 2: The text describes the ideas about paint ratios and the information in the table organizes 10 amounts into the five ratios that the student must consider. There is no extraneous information in this stem.

Task 3: Students have to connect a verbal description of a context to a graphical representation of the relationship described. The distractors in the graph make it moderately complex; students typically see one or at most two graphs on the same coordinate plane. There is no extraneous information in the stem.

Task 1: Students are asked to "select all that apply" for the first part (a variant of the familiar multiple choice) and to choose one and fill in blanks if they select the correct one. This type of interface is not complex.

Task 2: Students will type in their answers, so it is not complex.

Task 3: Students will type in their answers for the first two and "select all that apply" for the third (a variant of the familiar multiple choice). This interface is not complex.

The students in Carli’s class built some solar-powered robots which they raced in the cafeteria of the school.

After the race, Carli drew the graphs shown below to represent the distance $d$, in meters, that each of three robots A, B, and C traveled after $t$ seconds.