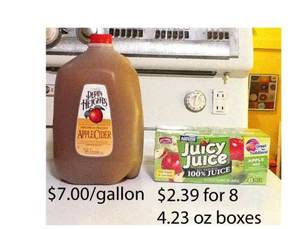 The goal of this task is to apply proportional reasoning to determine which of two ways of buying apple juice/cider is a better deal. The question is opened ended, allowing for a variety of approaches including

This task is a second variation to 7.RP.A.1, 7.RP.A.2.b Cider Versus Juice - Variation 1, https://www.illustrativemathematics.org/tasks/1968. This version offers a less directed approach to one of the questions posed in that task.

Instructors may need to help students decipher the phrase "better deal". Students need to understand that we do not simply mean which is the cheapest as-is, but which is the cheapest per unit of volume of liquid. Students will also need to realize that not all needed information is given for this task, namely, the conversion rate between gallons and ounces. Instructors can either let students look this up themselves or have it available for them, but ideally students should come to the conclusion themselves that they need to know this rate in order to continue. The conversion rate is 128 fluid ounces per gallon. If students struggle with the distinction between ounces and fluid ounces, it could be a good opportunity to discuss mass versus volume measurements, and how to tell by context which one is appropriate to use.

Because the problem is open ended, instructors should encourage students to present or prove their findings in more than one way! This may help to get students thinking about double number lines, tables, and unit rates all together.