Grade 8
Domain Geometry
Cluster Understand congruence and similarity using physical models, transparencies, or geometry software.
Standard Understand that a two-dimensional figure is congruent to another if the second can be obtained from the first by a sequence of rotations, reflections, and translations; given two congruent figures, describe a sequence that exhibits the congruence between them.
Task Cutting a rectangle into two congruent triangles

Below is a picture of rectangle $ABCD$ with diagonal $AC$. 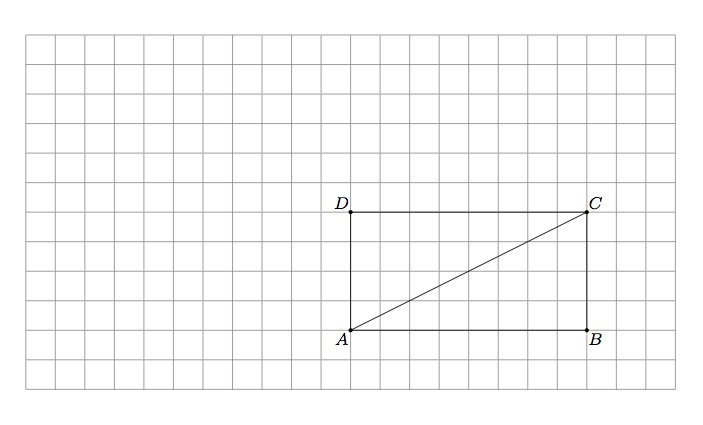 This task shows the congruence of two triangles in a particular geometric context arising by cutting a rectangle in half along the diagonal. The teacher may wish to have students think about part (d) of the problem first before going through parts (a) through (c). The grid has been added to the background as a geometric aid and as a means of determining lengths of sides. For part (d), the grid may need to be extended depending on which translations, rotations, and reflections the students choose to use.

A good way of reasoning about this problem abstractly would be to observe that the triangles are both right triangles and the lengths of the sides that come together to form the right angles are $4$ and $8$ units respectively. So to show that they are congruent we just need to "align" the right angles and the sides with corresponding lengths. Some questions which teachers may wish to have students explore further are:

The task is primarily intended for instructional purposes. Part (b) has been added explicitly to help students visualize how certain $180^\circ$ rotations influence a coordinate grid. Also part (d) has many possible answers, providing an ideal opportunity to have students share their (different) constructions with one another. If the teacher wishes to give students a chance to be creative and explore many different ways to transform $\triangle ACD$ to $\triangle CAB$ then part (d) alone can be used.

Below is a picture of rectangle $ABCD$ with diagonal $AC$.