Grade 8
Domain Geometry
Cluster Understand congruence and similarity using physical models, transparencies, or geometry software.
Standard Understand that a two-dimensional figure is similar to another if the second can be obtained from the first by a sequence of rotations, reflections, translations, and dilations; given two similar two-dimensional figures, describe a sequence that exhibits the similarity between them.
Task Creating Similar Triangles 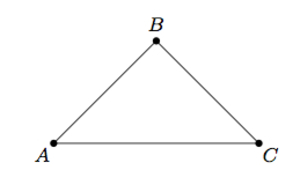 The purpose of this task is to apply rigid motions and dilations to show that triangles are similar. The teacher will need to monitor students carefully to make sure that they draw an appropriate line segment: for this particular triangle, the only one which will work is the segment from $B$ (the vertex of the right angle) perpendicular to $\overline{AC}$. If students are struggling, the teacher may wish to suggest thinking about the angles of $\triangle ABC$. Since $\angle B$ is a right angle, the two triangles into which $\triangle ABC$ is divided need to be right triangles as well and the only segment that accomplishes this is the one mentioned above. Teachers will also have to provide guidance in terms of what is expected in terms of establishing triangle similarity:

The construction here plays a key role in the high school proof of the Pythagorean Theorem: see https://www.illustrativemathematics.org/illustrations/1568. In this task the students have been given that the right triangle is isosceles but the same argument can be applied in general. Knowing that $\triangle ABC$ is isosceles simplifies the similarity transformation part of the task because students can calculate the angles of the two smaller triangles and conclude that they are also isosceles: the scale factor is then the ratio of leg lengths of $\triangle ABC$ to the leg lengths of the smaller triangles. 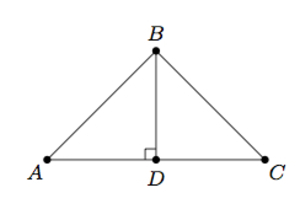 We will first show that $\triangle ADB$ is similar to $\triangle ABC$: the argument for $\triangle CDB$ is much the same. We can translate $D$ to $B$ and then rotate counterclockwise about $B$ so that the right angle $ADB$ matches up with the right angle $CBA$. We can then dilate the rotated triangle about $B$ by a factor of $\frac{|BC|}{|DA|} = \frac{|BA|}{|DB|}$. A detailed explanation of each step in this argument is provided below. While the rigid motion part can be verified with patty paper, showing that $\frac{|BC|}{|DA|} = \frac{|BA|}{|DB|}$ to give us our scale factor, requires a more detailed argument.

We can move vertex $D$ to match up with vertex $B$ by translating along segment $\overline{DB}$. The effect of this is pictured below, with the translated image of $\triangle ADB$ being denoted $\triangle A'D'B'$: 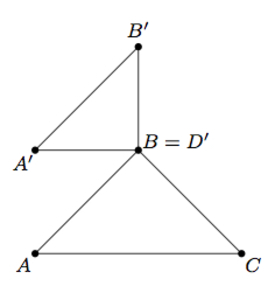 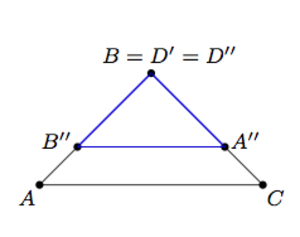