Grade 8
Domain Geometry
Cluster Understand congruence and similarity using physical models, transparencies, or geometry software.
Standard Use informal arguments to establish facts about the angle sum and exterior angle of triangles, about the angles created when parallel lines are cut by a transversal, and the angle-angle criterion for similarity of triangles. <span class='clarification'>For example, arrange three copies of the same triangle so that the sum of the three angles appears to form a line, and give an argument in terms of transversals why this is so.</span>
Task A Triangle's Interior Angles 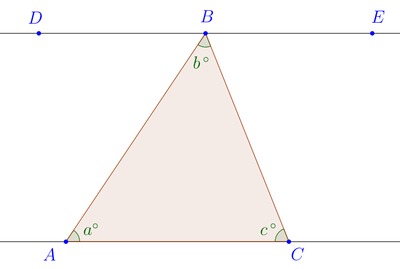 Explain why this result holds for any triangle, not just the one displayed above.

The task gives students to demonstrate several Practice Standards. Practice Standards SMP2 (Reason abstractly and quantitatively), SMP7 (Look for and make use of structure), and SMP8 (look for and express regularity in repeated reasoning) are all illustrated by the process of taking an initial solved problem -- in this case, the argument for the single given triangle -- and looking for the key structures that allow them to repeat that reasoning for a more abstract general setting.

$$ \angle DBA=a $$ Similarly, using the transversal $\overleftrightarrow{BC}$ of the same lines, we have the equality of alternate interior angles $$ \angle EBC=c. $$

Now since angles $\angle DBA$, $\angle EBC$, and $\angle ABC$ form a straight line, we have by substitution that

To see the result in general, take any $\triangle ABC,$ construct the parallel to $\overline{AC}$ through the point $B$. Then apply the same reasoning as above.

Explain why this result holds for any triangle, not just the one displayed above.