Below are two curves with some labeled points. 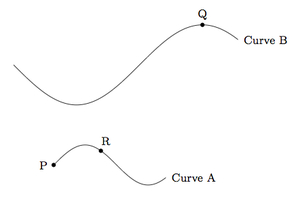 Curve B is a scaled version of curve A: this means that there is a scale factor $r \gt 0$ so that the distance between any pair of points on curve A is scaled by a factor of $r$ when looking at the corresponding points on curve B.

The goal of this task is to motivate and prepare students for the formal definition of dilations and similarity transformations. While these notions are typically applied to triangles and quadrilaterals, having students engage with the concepts in a context where they don't have as much training (these more "random" curves) lead students to focus more on the properties of the transformations than the properties of the figure.

The first two parts of the task are aligned with 7.G.1 and then the second two parts help to motivate the need for a more formal definition of similarity which is a key ingredient to 8.G.A. Students will already be comfortable with what it means to scale line segments and polygons (same shape but possibly different size). In order to motivate the technical and abstract notion of similarity transformations, the objects in this task are chosen to be complex curves. Geometric intuition is still valuable here as is seen in parts (a) and (b). Parts (c) and (d) are far more challenging. Since the shape is curved, finding the scale factor is more challenging than for the case of polygons because it is not easy to measure the length of the curves and some other method is needed. This part of the task brings out one very important aspect of similarity transformations, namely that they scale distances of all points in the plane in a uniform way: this allows us to find the scale factor by looking at two pairs of corresponding points and measuring the distance between them.

The final part of the task is very challenging in the absence of a precise working definition of similarity. Students should be able to find the ''approximate'' point on B that corresponds to R via qualitative reasoning: "if I trace curve B starting at P$^\prime$ I need to go past the first hump but not too far past.'' They can gain better accuracy by taking measurements and using their findings from (c). In fact, if they are sufficiently creative, they can find a plausible method for identifying the point with some creativity. It is also important to note that if we were not given curve B, then the method at the end of the solution would not be adequate to identify the point corresponding to R on curve A: the circles in the construction meet at two different points and so more work would be needed to make the correct choice.

With the formal definition of similarity transformation, however, students can answer part (d) in steps as follows:

Without the formal definition of similarity transformations or the construction with circles, there is another important method students can employ to estimate the point on curve B corresponding to R. The student can estimate the length of curve A from P to R by choosing several points between P and R on curve A and summing the lengths of the segments joining consecutive points. The same technique can be applied on curve B, namely adding many points and measuring the length of line segments gives us a way of finding a point on curve B whose distance from P$^\prime$ along the curve is close to a chosen value. Choosing as our value the approximate distance along curve A from P to R, multiplied by the scale factor going from curve A to curve B, will give a point on curve B which approximately corresponds to R. The more line segments we add, the better the correspondence will become.

Below are two curves with some labeled points.

Curve B is a scaled version of curve A: this means that there is a scale factor $r \gt 0$ so that the distance between any pair of points on curve A is scaled by a factor of $r$ when looking at the corresponding points on curve B.