This task requires the student to draw pictures of the two triangles and also make an auxiliary construction in order to calculate the areas (with the aid of the Pythagorean Theorem). Students need to know, or be able to intuitively identify, the fact that the line of symmetry of the isosceles triangle divides the base in half, and meets the base perpendicularly. Since reflective symmetry belongs to the 8th grade standards, it may be reasonable to assume this knowledge, or the teacher may wish to help students with this part of the picture if they are struggling. Once the student has the appropriate pictures with the perpendicular bisectors drawn the rest of the problem is an application of the Pythagorean theorem.

We begin by drawing pictures of the two triangles. These triangles are both isosceles because they each have a pair of sides whose length is 25. An isosceles triangle has a single line of symmetry and this is shown in the picture below: 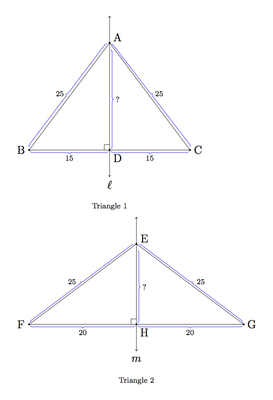 In fact the final calculation of areas is not necessary: since both $\triangle ABC$ and $\triangle DEF$ are broken into pairs of right triangles with the same side lengths they must have the same area.