Mrs. Lu has asked students in her class to find isosceles triangles whose vertices lie on a coordinate grid. For each student example below, explain why the triangle is isosceles.

This task looks at some triangles in the coordinate plane and how to reason that these triangles are isosceles. One way to do this is to calculate side lengths using the Pythagorean Theorem. This method is not, however, always the most efficient. For the triangles given in parts (a) and (b) two of the legs are obtained by moving along the grid lines, from one vertex, by the same number of squares vertically and horizontally. Also, in parts (a) and (b), a line of reflective symmetry is not hard to identify. So in these two cases there are alternative explanations and the teacher may wish to emphasize this. For part (c), it is not easy to see that this triangle is isosceles without the Pythagorean Theorem. The teacher may wish to ask students to explain why the triangles in (a) and (b) are isosceles without using the Pythagorean Theorem if this does not come up in student work. 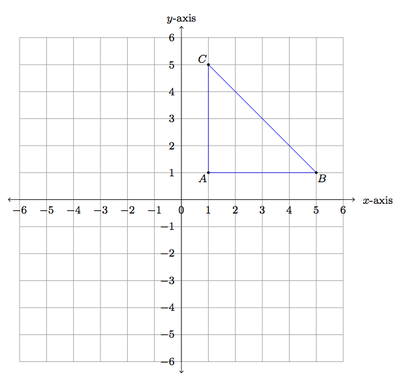 In this case, $\overline{AC}$ and $\overline{AB}$ are both 4 units long: since they lie along the gridlines, this can be seen by counting boxes.

This task gives students a chance to engage in MP3, Construct Viable Arguments and Critique the Reasoning of Others. They need to explain why each of the given triangles is isosceles and different reasoning is likely to be applicable in the three cases. Moreover, if students are asked to create their own isosceles triangles and then exchange with one another, this provides an additional opportunity for them to analyze their classmates' reasoning.

This task is closely related to www.illustrativemathematics.org/illustrations/1245 where a rectangle is placed in the coordinate grid in a skew way. In order to do this, it is necessary to write a whole number as a sum of two squares in different ways. The number chosen there is 125 which can be written as

The relationship of this example with the current task is that it is possible to create an isosceles triangle by starting at a point, (0,0) for example, and then going right 11 and up 2 to (11,2) and then going right 10 and up 5 to (10,5). These three vertices make an isosceles triangle as we can see using the Pythagorean Theorem and the calculation above which shows that two of the sides have length $\sqrt{125}$.

Mrs. Lu has asked students in her class to find isosceles triangles whose vertices lie on a coordinate grid. For each student example below, explain why the triangle is isosceles.