Grade 8
Domain Geometry
Cluster Understand and apply the Pythagorean Theorem.
Task Is this a rectangle?

The goal of this task is to provide an opportunity for students to apply a wide range of ideas from geometry and algebra in order to show that a given quadrilateral is a rectangle. Creativity will be essential here as the only given information is the Cartesian coordinates of the quadrilateral's vertices. Using this information to show that the four angles are right angles will require some auxiliary constructions. Students will need ample time and, for some of the methods provided below, guidance. The reward of going through this task thoroughly should justify the effort because it provides students an opportunity to see multiple geometric and algebraic constructions unified to achieve a common purpose. The teacher may wish to have students first brainstorm for methods of showing that a quadrilateral is rectangle (before presenting them with the explicit coordinates of the rectangle for this problem): ideally, they can then divide into groups and get to work straightaway once presented with the coordinates of the quadrilateral for this problem.

This task has been worded to support a wide range of approaches which help link eighth grade geometry standards with high school geometry (and algebra) standards. It is important that different methods of solution be considered because this reveals the connections between different standards. In order to solve this problem, students must show that the four angles in the quadrilateral are all right angles. One method to achieve this, at the eighth grade level, is with the Pythagorean theorem and its converse. Also at the eighth grade level, rigid motions of the plane can be applied to the quadrilateral so that its angles are shown to be congruent to angles made by horizontal and vertical grid lines. At the high school level, one way to show that an angle is a right angle is to make algebraic calculations of slopes of the lines containing the two rays of the angle. A second method produces several auxiliary triangles and uses the important notion of similarity. For this last solution, the teacher may wish to provide extra prompting: drawing the coordinate rectangle circumscribing the given quadrilateral is a starting point but some encouragement to study the four triangles left when the given quadrilateral is removed may also be necessary. Two final solutions have been presented, one making use of the $SSS$ congruence criterion for triangles and the final one using a criterion for when a parallelogram is a rectangle.

One of the advantages to open-ended tasks like this one is that they allow for multiple, creative solutions and, in so doing, show how the different strands of the curriculum are related. This task supports the transformational approach to geometry adapted in the CCSS in a very strong way: the second solution uses rotations and translations in a fundamental way while the fourth solution requires an understanding of similar triangles and consequently of dilations of the plane. At the same time, it gives an opportunity to relate these new ideas to classical approaches using the Pythagorean Theorem and slopes of lines.

This task is intended for instructional purposes only. The open-ended nature of the task makes it ideally suited for extended work and discussion, including sharing of ideas and different approaches. Two of the solutions are appropriate for the eighth grade while the other four require knowledge of high school content so ideally students will work on this both in middle school and then later in high school.

Teachers working with 8th grade students may choose to provide scaffolded prerequisite tasks that present the coordinates for four vertices of a quadrilateral with its center at (0,0) in order to employ a single rigid motion (rotation) and then a separate set of coordinates for four vertices forming a quadrilateral with side parallel to the grid lines. Students could then consider both of these prerequisite tasks and strategies useful for solving them when presented with this task item as written. There is also a more directive version of this task that asks students to use the Pythagorean theorem: 8.G A rectangle in the coordinate plane

The solution 6 is the high school version of solution 2. The rest of the solutions represent different approaches as they are conceptually very different from one another.

Solution: Pythagorean theorem and its converse (8.G.7 and 8.G.8) 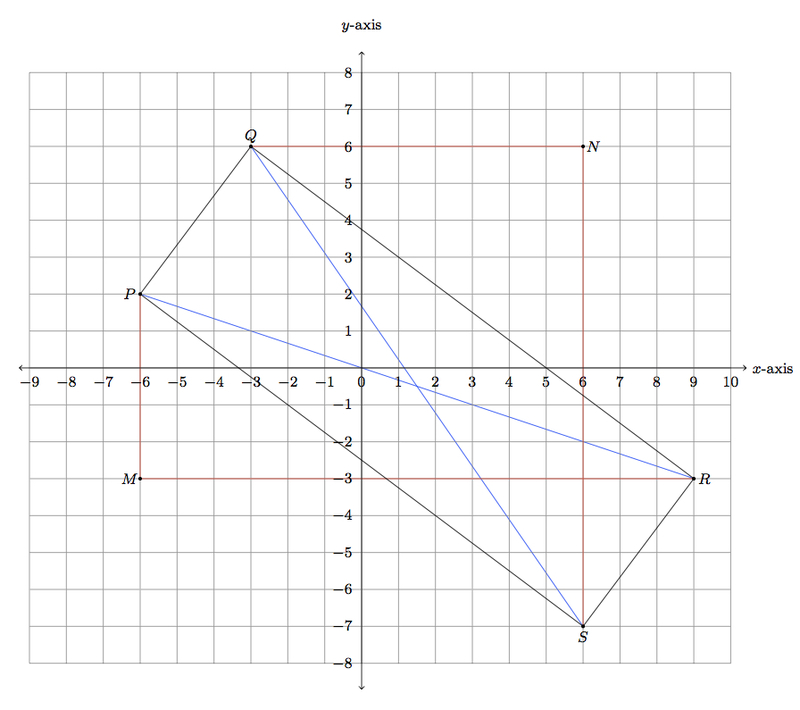 We can find the lengths of $\overline{PR}$ and $\overline{QS}$ applying the Pythagorean theorem to the right triangles $PMR$ and $SNQ$.

To show that $PQRS$ is a rectangle, we need to show that the four angles are right angles. To do this, we use the converse of the Pythagorean theorem which we will apply to triangles in the picture below: 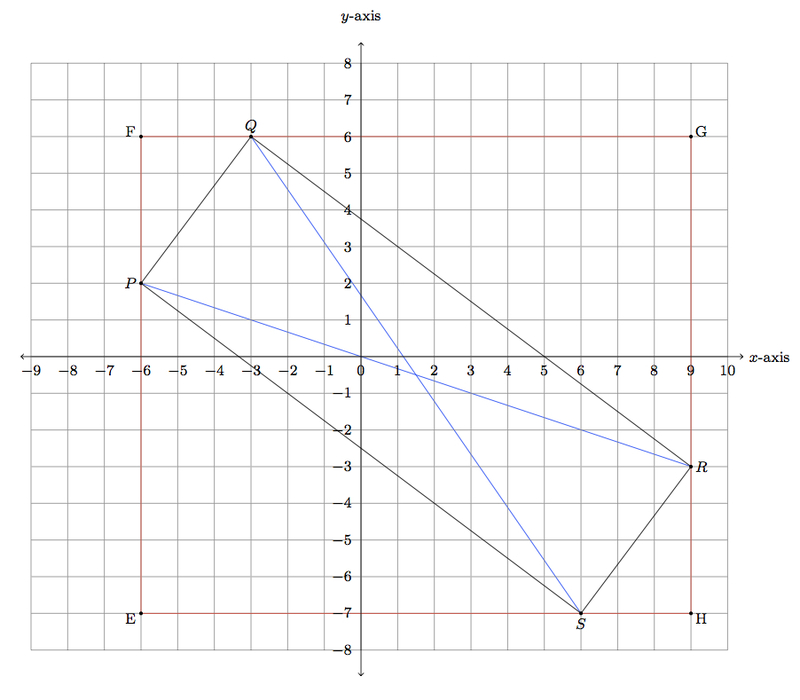 By the converse of the Pythagorean theorem applied to $\triangle PQR$, $\angle PQR$ is a right angle. 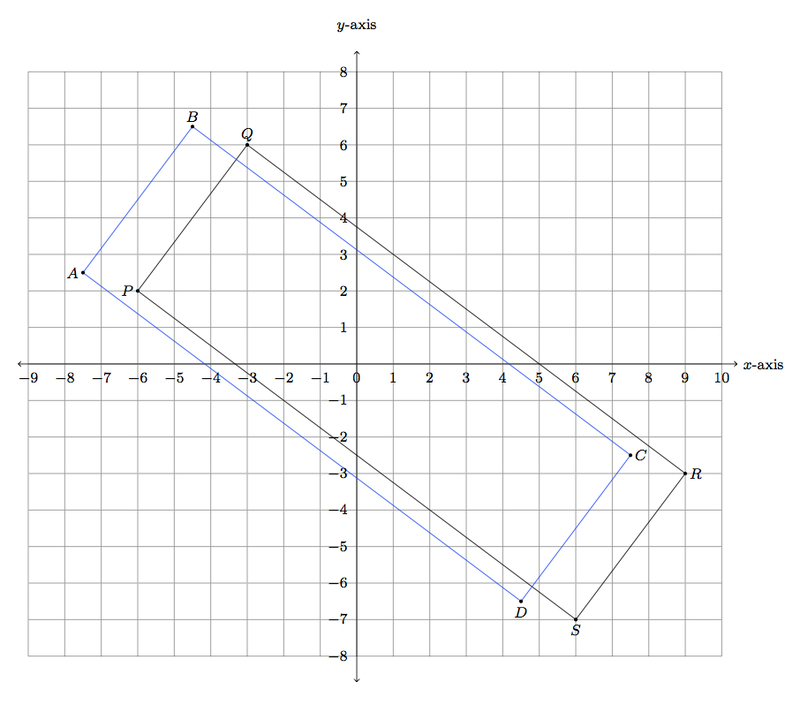 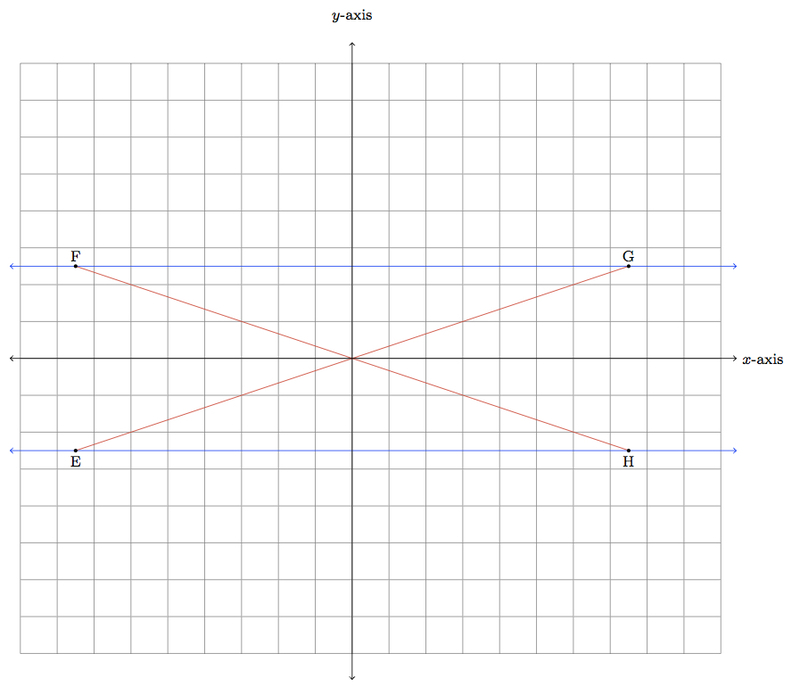 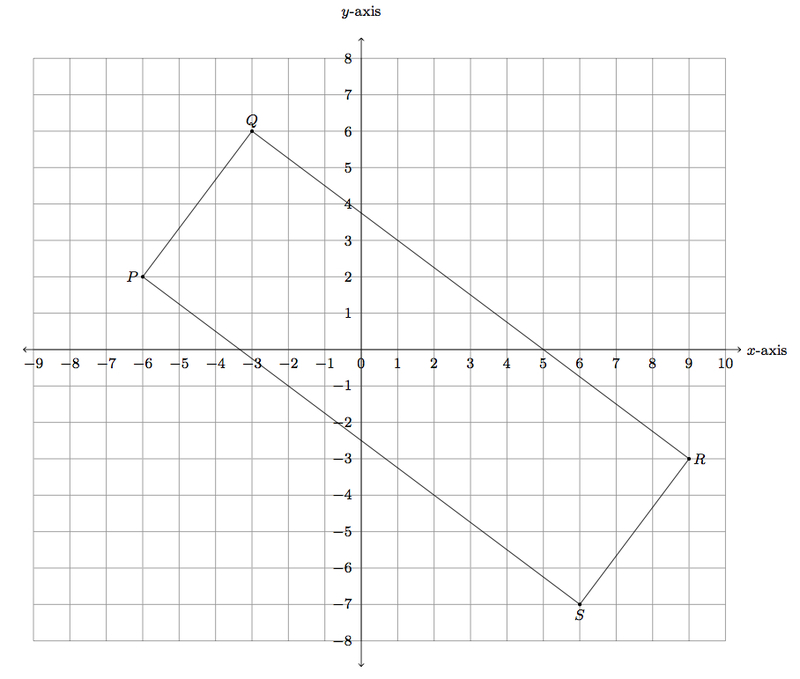 The idea of this approach is to consider the lines containing the four sides of quadrilateral $PQRS$ and show, using the slope criterion, that they meet in right angles. Recall that the slope criterion says that if line $L_1$ has slope $s_1 \neq 0$ and line $L_2$ has slope $s_2 = \frac{-1}{s_1}$ then $L_1$ and $L_2$ are perpendicular (at the single point where they meet). We calculate the slopes of the lines containing adjacent vertices of $PQRS$:

This approach begins by adding a rectangle, whose sides lie on the coordinate gridlines, in which the given rectangle is inscribed as pictured below: 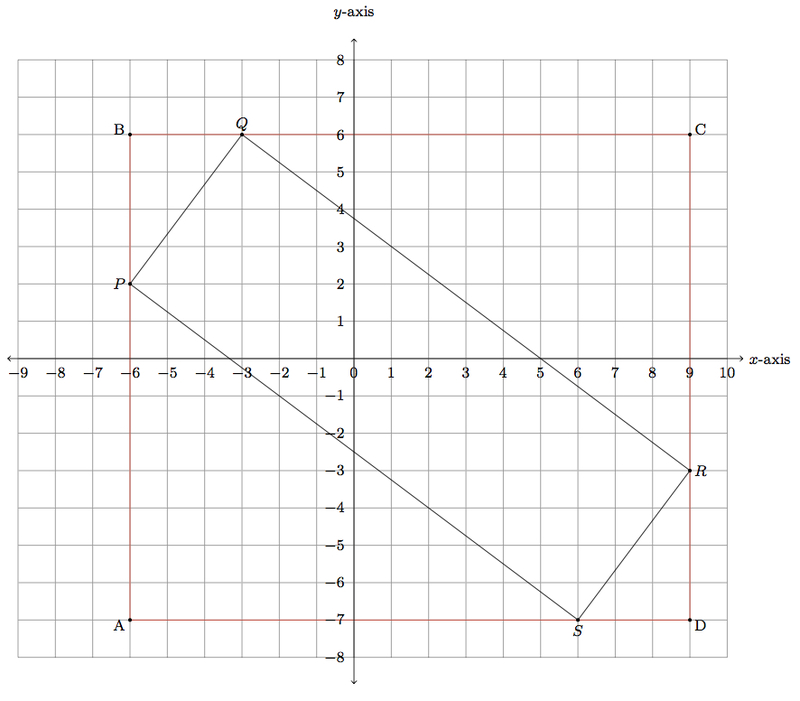 A similar argument shows that the other four angles in quadrilateral $PQRS$ are right angles and so it is a rectangle. 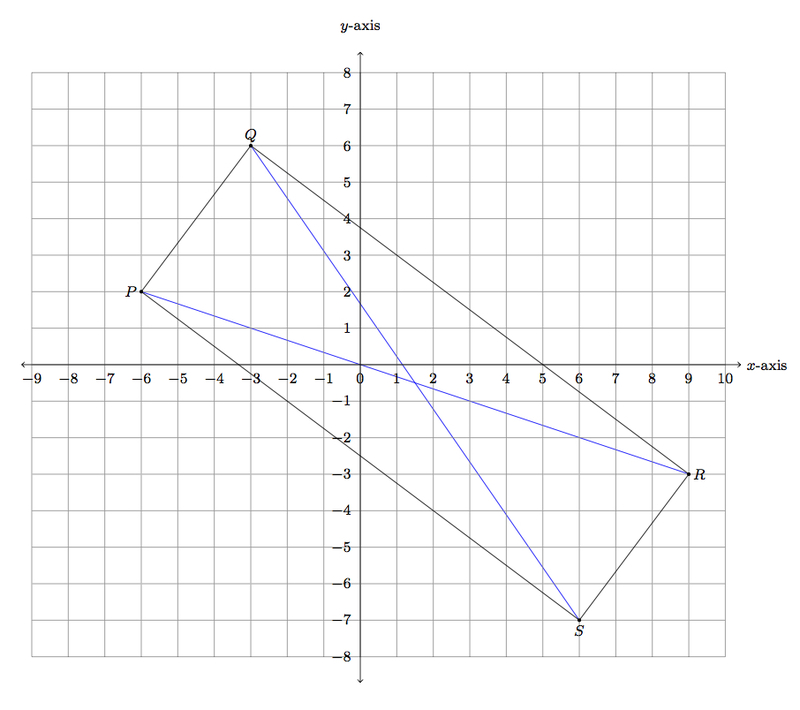 As in the first solution, the length of the two diagonals can also be found using the Pythagorean theorem for distance: