High School Algebra
Domain Creating Equations
Cluster Create equations that describe numbers or relationships.
Standard Create equations and inequalities in one variable and use them to solve problems. <span class='clarification'>Include equations arising from linear and quadratic functions, and simple rational and exponential functions.</span>
Task Sum of angles in a polygon

This problem provides students with an opportunity to discover algebraic structure in a geometric context. More specifically, the student will need to divide up the given polygons into triangles and then use the fact that the sum of the angles in each triangle is $180^\circ$. The algebraic formula which occurs in step (c) can be seen as a generalization of parts (a) and (b) but an argument establishing this formula requires a delicate argument which successively reduces the number of sides of the polygon in question. Alternatively, step (c) can be accomplished by providing an explicit division of the given polygon into triangles. Both solutions are provided and it is important to note that the logic is rather different: for the first solution, the case of a polygon with $n$ sides is reduced to the case of a polygon with one fewer, or $n-1$ sides. This argument requires subscripts and the teacher may wish to provide guidance here. The second argument is a direct generalization, a careful subdivision into triangles for parts (a) and (b) and requires much less work with subscripts.

When the polygon has angles measuring more than $180$ degrees the result is still true but more care is needed to explain why. For example, in the picture below the quadrilateral has one reflex angle (that is, one angle measuring greater than 180 degrees): 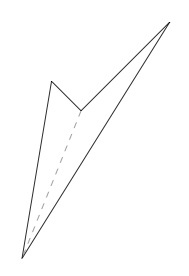 The sum of the four angles is still equal to $360$ degrees, however, as can be seen by drawing the auxiliary line indicated which divides the quadrilateral into two triangles. The division needs to be done carefully, however, if there are several angles measuring over $180$ degrees which may occur for polygons with more sides. This could make for a challenging and interesting classroom activity. The pentagon in part (b) was chosen with one angle measuring greater than $180$ degrees in order to give students a chance to think about how to deal with this situation.

This task illustrates three of the mathematical practices. The first two parts require a careful combination of geometric and algebraic reasoning (MP2) and, in order to provide a convincing argument (MP3), the algebra and geometry need to be carefully linked. This link is accomplished through a picture which the students must provide. Finally, in order to complete part (c), students must identify a pattern from parts (a) and (b) and then explain why this works for a polygon with any number of sides: this is a good example of MP8.