High School Functions
Domain Interpreting Functions
Cluster Interpret functions that arise in applications in terms of the context.
Standard For a function that models a relationship between two quantities, interpret key features of graphs and tables in terms of the quantities, and sketch graphs showing key features given a verbal description of the relationship. <span class='clarification'>Key features include: intercepts; intervals where the function is increasing, decreasing, positive, or negative; relative maximums and minimums; symmetries; end behavior; and periodicity.</span>
Task Lake Sonoma

California is in the fifth year of a drought. Towns have been asked to decrease water use across the state. The graph below shows the water storage in Lake Sonoma, a reservoir in Northern California from 1988, shortly after it was first filled, until February 1, 2015. 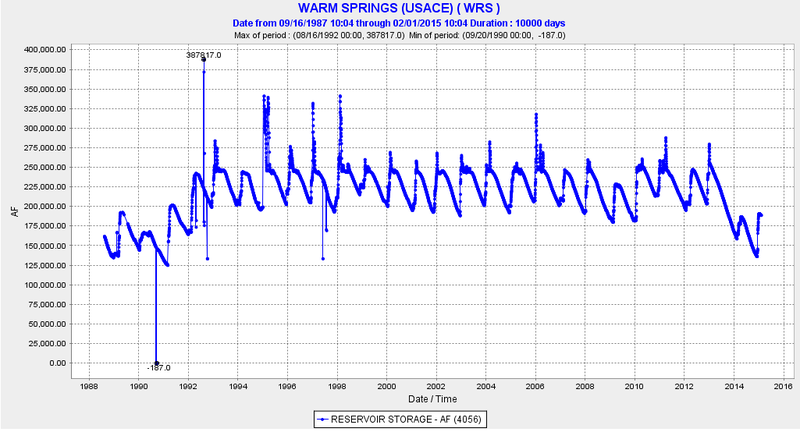 The graph shows the water storage in Lake Sonoma, a reservoir in Northern California. The data for Lake Sonoma is freely available at http://cdec.water.ca.gov/cgi-progs/stationInfo?station_id=WRS.

(At http://cdec.water.ca.gov/, one can access the sensor for many more locations.) More information is available at http://www.scwa.ca.gov/current-water-supply-levels/ comparing water storage levels in recent years.

The graph of the water storage in Lake Sonoma has many features that are interesting to interpret. The features are connected to weather events or water agency management of the reservoir. Some of the features are easier to explain than others. Students might recognize that during the summer months the water level goes down and in the winter it goes up. They might be confused by the sudden changes. The extremely abrupt changes are caused by sensor errors, but the sudden peaks above 250,000 AF are explained by water management rules that require a buffer in the water storage for larger storm events. The instructor can fill in some of this information after students have a chance to identify the features of the graph.

The units on the vertical axis of the graph describe the water storage (volume) in the reservoir using acre-feet (AF). This is an unfamiliar volume measure that is nevertheless widely used in water management. One acre-foot is the volume of water it takes to cover one acre of land with one foot of water.

This task asks students to describe features of a graph. It provides an opportunity to introduce (or use) mathematical terminology that makes communication easier and more precise, such as: periodic behavior, maxima, minima, outliers, increasing, decreasing, slope.

This is a critical step in the modeling cycle—does your interpretation make sense in the context of the problem? Students have likely not seen acre-fee before and will have to learn how to interpret them.

To use this task, an instructor should be prepared to guide students to resources about background information or to fill in some of the information after the students ask about the different features of the graph.

An instructor can modify the task and turn it into a more open investigation by not giving a specific graph but rather directing the students to the website where they can generate their own graphs and tables of data for different time periods. Weather data is available for many regions and depending on the severity of recent weather events, it might make a compelling context for students to investigate how bad the weather during a recent season was by comparison with other years or regions of the country.

d) As discussed in part c), the water storage in the last two years has been lower than at any time since the reservoir was first completely filled. February 1 is still early for the Northern California rainy season, which usually last through April. A positive sign is that the February 2015 water level is already above the season maximum from the previous year. It might be too early to make a definite decision. (A natural next step is to look up the current data to continue the discussion.)

California is in the fifth year of a drought. Towns have been asked to decrease water use across the state. The graph below shows the water storage in Lake Sonoma, a reservoir in Northern California from 1988, shortly after it was first filled, until February 1, 2015.