High School Functions
Domain Interpreting Functions
Cluster Interpret functions that arise in applications in terms of the context.
Standard For a function that models a relationship between two quantities, interpret key features of graphs and tables in terms of the quantities, and sketch graphs showing key features given a verbal description of the relationship. <span class='clarification'>Key features include: intercepts; intervals where the function is increasing, decreasing, positive, or negative; relative maximums and minimums; symmetries; end behavior; and periodicity.</span>
Task Playing Catch

Here is a graph that somebody drew for the height of a ball over time. Write a story that could have led to the graph.

This task gives the graph of the height of a ball over time and asks for a story that could be represented by this graph. The graph is the mathematical representation of a situation and features of the graph correspond to specific moments in the story the graph tells. The purpose of the task is to get away from plotting graphs by focusing on coordinate points and instead looking at the bigger picture – a qualitative view. We are not given specific coordinates, so we can’t say that after 10 seconds the ball is 5 feet high, but we can still say a lot about the situation.

This task has aspects of mathematical modeling. Students are asked to interpret a mathematical representation in the context of a real world situation. They are making appropriate simplifications. Even though the variables are given, time and height of the ball, the students have to fill in possible units, explicitly or implicitly, as they are coming up with different stories.

Attached to this task are samples of student work. This task was given as an “exit ticket” after a lesson on graphing functions from context. In the lesson students watch a video of a game of catch and graphed the height of the ball over time as well as other quantities (speed, distance from one of the players over time). This task then turns the process around, giving a graph and asking students to provide the story. Some of the work samples show one student’s story followed by another student’s critique of the story.

Story 2: You are playing tennis. First the ball is on the ground and you pick it up. You toss it into the air but rather than hit it, you catch it again. Then you toss it up again, but not very well, so the ball falls on the ground. You pick it up and toss it up again, but this time you really missed the hit and it lands in a tree where it is stuck.

In some of the student work samples below, questions from other students critiquing the work are given in addition to the original answer. 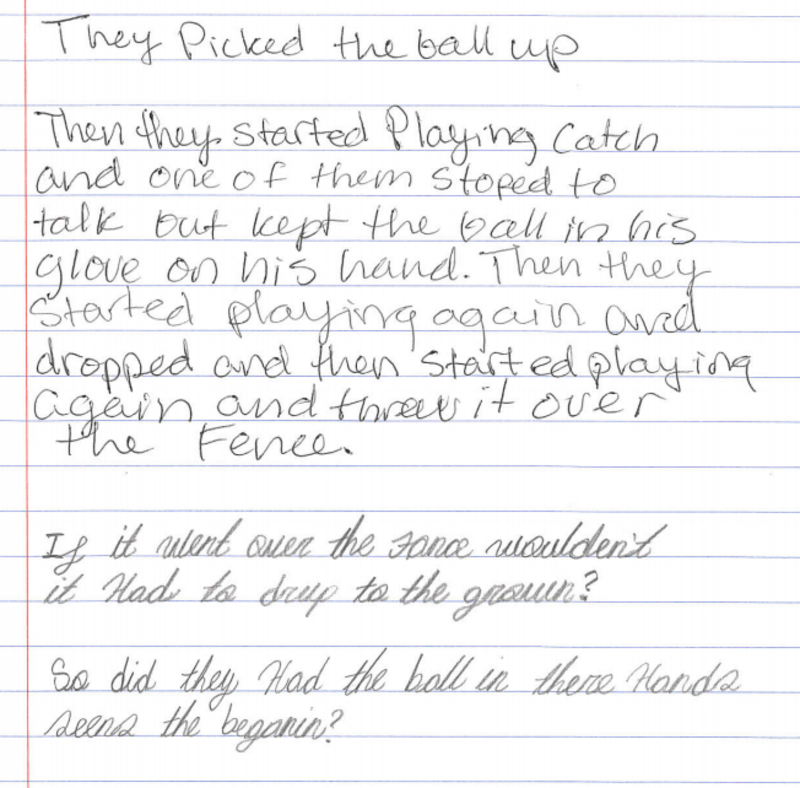 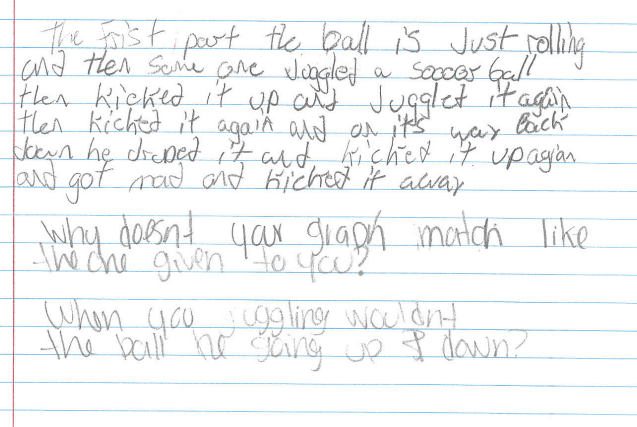 Here is a graph that somebody drew for the height of a ball over time. Write a story that could have led to the graph.