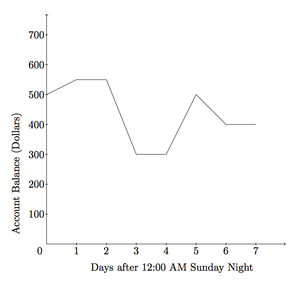 The purpose of this task is to study an example of a function which varies discretely over time. Step functions are often good examples for this type of function. In practice, instead of a step function, bar graphs are sometimes used. Alternatively, Jessie's method of ''smoothing'' over the jumps is also very common.

Many real world phenomena are discrete but the step functions that model them are not commonly used. There is a good opportunity for the instructor to discuss the advantages and disadvantages of the two graphs produced in this problem. Jessie's graph has the advantage of immediately communicating the general trend in the bank account balance. The step function graph is more accurate and communicates more information but it is perhaps not as easy to read since it is a less familiar format.