High School Geometry
Domain Circles
Cluster Understand and apply theorems about circles
Standard Construct the inscribed and circumscribed circles of a triangle, and prove properties of angles for a quadrilateral inscribed in a circle.
Task Circumscribed Triangles

Below is a picture of a triangle circumscribed about a circle: 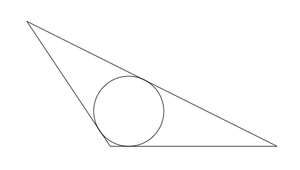 The goal of this task is to study where a circumscribed triangle can meet a given circle. Students will need to experiment and the teacher may need to provide guidance about the different configurations of the three points. The task is ideally suited for group work, allowing students to compare their constructions and divide up the many possible cases that need to be treated.

In the solution presented, the points where the triangle touches the circle are considered successively to make the logic of the construction as clear as possible. Students may require guidance if this type of approach is desired. It would be beneficial, however, to allow them to experiment first with different configurations before providing any additional instructions. This task is ideally suited for computer technology which would allow students to vary $P$, $Q$, and $R$ and explore what happens with the tangent lines at those three points.

We will add each side of our circumscribed triangle separately to see what constraints there are. For the first side, we place the point $A$ of tangency with the circle at the top as shown in the picture below: 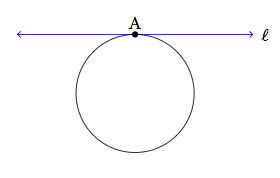 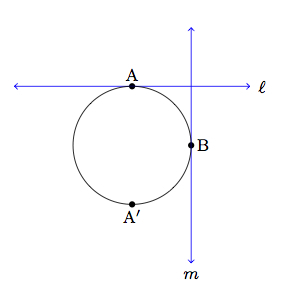 For the third point $C$, there are multiple constraints. It cannot be opposite $A$ or $B$ for the reason described above. The points which do give a triangle circumscribing the circle are plotted below in green: 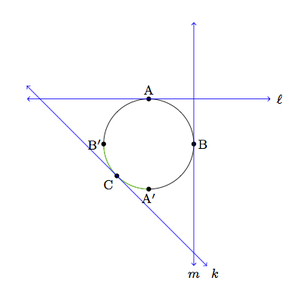 Below is a picture of a triangle circumscribed about a circle: