High School Geometry
Domain Congruence
Cluster Experiment with transformations in the plane
Standard Given a rectangle, parallelogram, trapezoid, or regular polygon, describe the rotations and reflections that carry it onto itself.
Task Symmetries of a quadrilateral I

Symmetries of a quadrilateral I

Suppose $ABCD$ is a quadrilateral for which there is exactly one rotation, through an angle larger than 0 degrees and less than 360 degrees, which maps it to itself. Further, no reflections map $ABCD$ to itself. What shape is $ABCD$?

This task provides an opportunity to examine the taxonomy of quadrilaterals from the point of view of rigid motions. As is the case with triangles, the different types of quadrilaterals are often characterized by their symmetries: the square is the most symmetric, followed by the rectangle and rhombus, then come the regular trapezoid and parallelogram: other quadrilaterals lack symmetry. Students will need to think about this characterization of quadrilaterals in terms of rotational symmetry in order to identify $ABCD$ as a parallelogram which is not a rhombus and not a rectangle.

If appropriate geometry software is available, this task provides an ideal opportunity for students to engage in MP5, Use Appropriate Tools Strategically, as students can experiment with different quadrilaterals in order to determine which ones have rotational symmetry. Once they have reached a conclusion about what type of quadrilateral $ABCD$ is, they will need to Reason Abstractly and Quantitatively (MP2) in order to show both that $ABCD$ is a parallelogram and that it is neither a rhombus nor a rectangle. In particular, the beginning of the argument will need to identify that the rotation must be a 180 degree rotation and this will require examining the composition of two rotations of the plane.

Before proceeding to examine $ABCD$ further, we provide a picture: 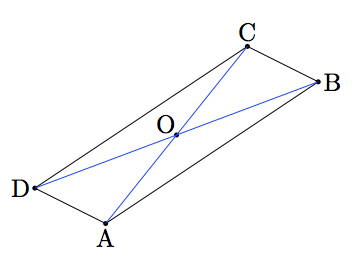 A 180 degree rotation interchanges $A$ and $C$ and also interchanges $B$ and $D$. Moreover, $O$ is the midpoint of both of $\overline{AC}$ and $\overline{BD}$. This particular parallelogram has no other symmetries, save for the identity. Certain special parallelograms do admit other symmetries: for example a rectangle has two lines of reflective symmetry in addition to a 180 degree rotation (plus additional symmetries if the rectangle happens to be a square). Another special class of parallelograms which admit additional symmetries are are the rhombuses: these also have two lines of reflective symmetry (passing through opposite vertices) like a rectangle. So we conclude with a final answer of:

Quadrilateral $ABCD$ is a parallelogram which is neither a rectangle nor a rhombus.

Below are pictures of a rectangle and a rhombus with their lines of symmetry: 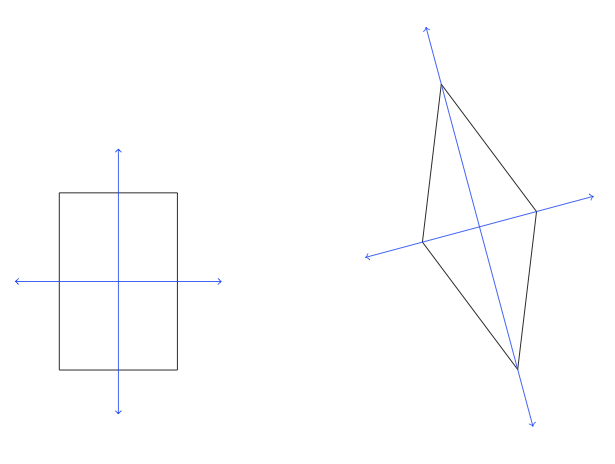 Note that a square is both a rectangle and a rhombus and has 4 lines of symmetry as a result.

Symmetries of a quadrilateral I

Suppose $ABCD$ is a quadrilateral for which there is exactly one rotation, through an angle larger than 0 degrees and less than 360 degrees, which maps it to itself. Further, no reflections map $ABCD$ to itself. What shape is $ABCD$?