Why Does ASA Work? 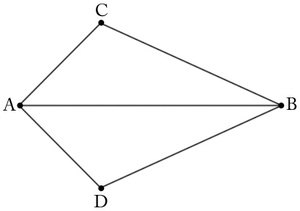 Unlike the SAS criterion for congruence, where it can be vital that the congruent angles be the ones determined by the corresponding sides, the ASA criterion for congruence works equally well for any two angles. This is because the sum of the angles in a triangle in the euclidean plane is always 180 degrees. Consequently, if any two triangles $ABC$ and $DEF$, not necessarily the ones in the problem, share a pair of congruent angles, say angle $A$ is congruent to angle $D$ and angle $B$ is congruent to angle $E$, then the other pair of angles, $C$ and $F$, also have to be congruent. This is because, letting $m$ denote angle measure:

The two triangles in this problem share a side so that only one rigid transformation is required to exhibit the congruence between them. In general more transformations are required and the "Why does SSS work?'' and "Why does SAS work?'' problems show how this works.

We show the two triangles in the diagram are congruent by reflecting $\triangle ADB$ over the line $AB$ and showing that the result coincides with $\triangle ACB$.

Call $D'$ the image of $D$ under the reflection about line $AB$. Since reflection about a line is a rigid motion of the Euclidean plane, it preserves both distances and angles. Since angle $DAB$ is congruent to angle $CAB$ by hypothesis we can conclude that angle $D'AB$ is congruent to angle $CAB$. Since these two angles are congruent, share ray $AB$ and are both above line $AB$, we must have that ray $AD'$ is the same as ray $AC$. In particular, we see that $D'$ lies on ray $AC$. Reasoning in the same way with congruent angles $D'BA$ and $CBA$ shows that $D'$ also lies on ray $BC$. We know, however, that rays $AC$ and $BC$ meet in exactly one point, namely $C$, so this establishes that $D' = C$. Since reflection about line $AB$ fixes points $A$ and $B$, the triangle $ABD$ has been mapped via reflection to triangle $ABC$ and consequently these two triangles are congruent.

Why Does ASA Work?