Suppose $ABC$ is an equilateral triangle: 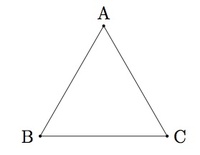 This activity is one in a series of tasks using rigid transformations of the plane to explore symmetries of classes of triangles, with this task in particular focusing on the class of equilaterial triangles. Students will have previously seen similar material in earlier grades (e.g., standard 4.G.3: "Recognize a line of symmetry for a two-dimensional figure as a line across the figure such that the figure can be folded along the line into matching parts. Identify line-symmetric figures and draw lines of symmetry."), and this task is a similar exploration with a level of mathematical precision more appropriate for high schools students. In particular, the task has students link their intuitive notions of symmetries of a triangle with statements proving that the said triangle is unmoved by applying certain rigid transformations.

The mechanism through which students do this is via congruence proofs, so the task illustrates the general relationship between congruence and rigid transformations, as fits naturally under the cluster "understand congruence in terms of rigid motions." At the high school level, students will need to use the definition of reflections and the teacher may wish to recall this before having students work on the problem. An informal discussion about part (a) may be beneficial as well so that the students have a direction in which to go for part (c) which is more challenging.

If students already know the analogous reflection results for isosceles triangles (see, e.g., the result presented in the task ''Reflections and Isosceles Triangles'') then this task can be accomplished by carefully applying this result three times, as an equilateral triangle is a triangle which can be viewed as an isosceles triangle in three different ways. Students can still work on this problem without prior exposure to ''Reflections and Isosceles Triangles" and an appropriate argument has been supplied. In addition, part (a) requires repeating an argument three times, making it more suitable for group work where students can identify the common argument and not write out the full details three times.

Suppose $ABC$ is an equilateral triangle: