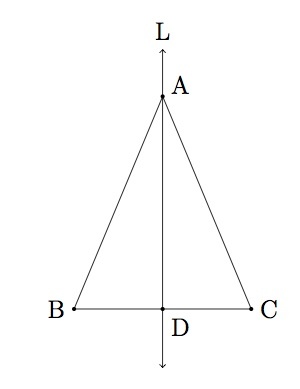 This activity is one in a series of tasks using rigid transformations of the plane to explore symmetries of classes of triangles, with this task in particular focussing on the class of isosceles triangles. Students will have previously seen similar material in earlier grades (e.g., standard 4.G.3: "Recognize a line of symmetry for a two-dimensional figure as a line across the figure such that the figure can be folded along the line into matching parts. Identify line-symmetric figures and draw lines of symmetry."), and this task is a similar exploration with a level of mathematical precision more appropriate for high schools students. In particular, the task has students link their intuitive notions of symmetries of a triangle with statements proving that said triangle is unmoved by applying certain rigid transformations.

The mechanism through which students do this is via congruence proofs, so the task illustrates the general relationship between congruence and rigid transformations, as fits naturally under the cluster "understand congruence in terms of rigid motions." At the high school level, students will need to use the definition of reflections and the teacher may wish to recall this before having students work on the problem. The instructor may wish to discuss with students how to draw an appropriate picture for part (b) and part (c) as this will be essential in order to make progress on these problems. In addition, it may be necessary to recall the definition of reflection about a line $L$: reflection about $L$ maps each point on $L$ to itself and if $P$ is not on $L$ then reflection about $L$ maps $P$ to $Q$ when $L$ is the perpendicular bisector of segment $PQ$ as pictured below: 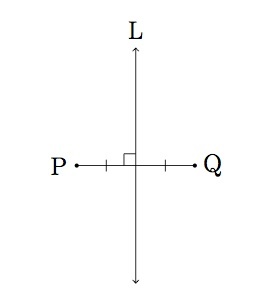 This task is mainly intended for instructional purposes: for students with a strong visual sense of geometry, rigid motions of the plane provide a rich source of ideas which can be used to grasp many important geometric ideas.