High School Geometry
Domain Congruence
Cluster Prove geometric theorems
Standard Prove theorems about triangles. <span class='clarification'>Theorems include: measures of interior angles of a triangle sum to $180^\circ$; base angles of isosceles triangles are congruent; the segment joining midpoints of two sides of a triangle is parallel to the third side and half the length; the medians of a triangle meet at a point.</span>
Task Sum of angles in a triangle 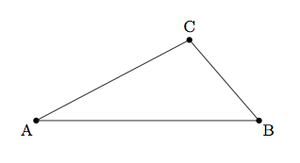 The goal of this task is to provide an argument, appropriate for high school students, for why the sum of the angles in a triangle is 180 degrees. Students see this result in the eighth grade (https://www.illustrativemathematics.org/illustrations/1501) where it is presented in a less formal, grade appropriate fashion. Here students use the formal properties of rotations (namely that they preserve angle measures) to deduce that the sum of the angles in the triangle is 180 degrees. The parallel postulate (that given a line $\ell$ and a point $P$ not on $\ell$, there is one and only line parallel to $\ell$ and containing $P$), and the properties of rigid motions are used in part (c).

The approach taken here is more demanding as only the given triangle is pictured and the rest of the construction is done dynamically from there. The teacher can also give students the parallel line to $\overleftrightarrow{AB}$ through $C$ (as in the eighth grade task) and then have students carefully reason from there to arrive at the conclusion in part (d).