High School Geometry
Domain Congruence
Cluster Make geometric constructions
Standard Make formal geometric constructions with a variety of tools and methods (compass and straightedge, string, reflective devices, paper folding, dynamic geometric software, etc.). <span class='clarification'>Copying a segment; copying an angle; bisecting a segment; bisecting an angle; constructing perpendicular lines, including the perpendicular bisector of a line segment; and constructing a line parallel to a given line through a point not on the line.</span>
Task Bisecting an angle 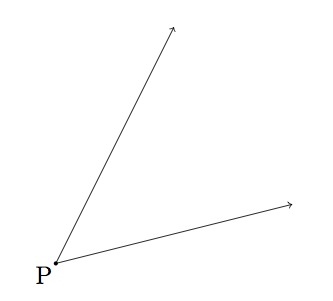 This task provides the most famous construction to bisect a given angle. It applies when the angle is not $180$ degrees. Since the rays forming a $180$ degree angle are collinear, this case can be handled separately by constructing the perpendicular to a line through a given point: note that the construction in the collinear case is actually the same as the one employed here except that the two circles in step (b) need to have radii larger than $r$ so that they meet in two points.

For part (b) of the problem, it is not necessary to use $r$ for the radii of the circles with centers $Q$ and $R$. The only requirement is that the radii be chosen so that these two circles meet in two points. In practice, this means that the radius must be greater than half of $|QR|$. When dealing with apparent intersections of lines and circles, the teacher will likely wish to be very liberal in terms of what type of argument is considered acceptable. For example, in part (a), the definition of a ray through the vertex $P$ can be used to explain why a given circle with vertex $P$ and radius $r$ meets each ray in exactly one point. Alternatively, a picture could also be viewed as acceptable. In part (b), the circles of radius $r$ with centers $Q$ and $R$ definitely meet at $P$ (by construction) but finding the second point $B$ would require a sophisticated argument: for example, the equations of the two circles could be invoked and a long algebraic explanation could be given. In the context of this problem, however, using the picture which the students will draw with straightedge and compass is appropriate as an explanation.

We note that this construction comes historically from the compass-and-straightedge constructions, but are equally applicable in a setting where students use dynamic geometry software to explore geometry. This construction in particular could be used to develop students' geometric problem-solving skills, as they attempt to bisect an angle in a geometry program with only the most basic of tools available to them. As such, the task, which provides one solution to said construction problem, is principally intended for instruction or exploration purposes, although as a classic and elegant construction, all students should know this procedure for bisecting an angle.

The first two steps of this applet allow the user to change a couple things by dragging blue points. After these two steps, it is all a walk through.