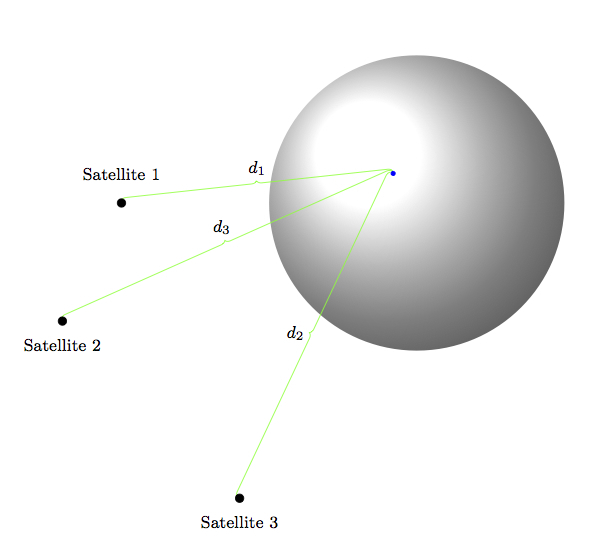 Reflective of the modernness of the technology involved, this is a challenging geometric modelling task in which students discover from scratch the geometric principles underlying the software used by GPS systems.

The geometric starting point is the observation that the set of points at a distance $d$ from a point $P$ in space (which in this problem will model the satellite) is a sphere. The earth is also modeled by a sphere for this problem, and so the key geometric objects determining the success of the GPS locator are intersections of sphere. As such, students need some familiarity with these objects (e.g., as presented in ''Global Positioning System I''). So they will need to know that an intersection of two different spheres can either be empty, a point, or a circle and this problem gives them an opportunity to apply this knowledge in a concrete setting. In particular, students will need to determine possible positions of satellites so that information from one, two, or three of them is sufficient (or not sufficient) to locate the GPS unit on the surface of the earth. This requires good geometric intuition, experimentation, and possibly dealing with the algebraic equations of the spheres involved. More information about the precise configuration of the satellites used in the Global Positioning Sytem is provided here:

From a practical perspective, unless the satellites are in very special position, readings from three satellites will suffice to locate the GPS unit on the surface of the earth (assuming that the earth is modeled as a fourth sphere). Rather than using readings from distinct satellites, in principle the GPS could receive several readings, spread over a small span of time, from a single satellite. One reason data from multiple satellites might be better is that if, for example, one of the distance readings is inaccurate, then the data will be inconsistent and the unit will have to wait for more information (or throw out the spurious reading if it is possible to identify it as such). If the data is coming from a single satellite, however, over a very short span of time, then it is possible that all readings would be similarly faulty and then the GPS unit could record the wrong position on the earth. In other words, receiving data from several satellites makes the system more robust.

GPS systems are common now on cars as well as some mobile phones. They help people navigate the world and help lost or injured people such as hikers or skiers to be found. GPS devices track time in addition to location but this has been left out of the scenario considered here. Much more information about the Global Positioning System is available at:

The earth is only approximated by a sphere but the mathematics behind this task applies to the way GPS systems actually function: thinking of the earth, in part (c) of the question, as a fourth sphere, the reasoning gives an example where these four spheres meet in exactly one point, namely the location of the GPS device. So in practice instead of using the earth as a fourth sphere, a GPS system requires a fourth satellite reading in order to determine a position in space (which happens to lie on the earth's surface).

This task allows students to develop their visual intuition while working in an important real world situation. The algebra involved in solving the modeling for different situations is rich and relatively involved. The teacher will have to make a decision as to how much of this to include along with the visualization. This is presented serpatedly in ''Global Positioning System I'' but some of this has been repeated in the solution here for convenience.

Although information from three satellites is not in general enough to locate the GPS the situations where it fails are very specific (namely, the three satellites and the center of the earth have to be coplanar) and extremely unlikely to occur. Of course there is no harm in receiving in put from four or more satellites since this will not influence the determination of the location of the GPS.

There are two vital aspects to this task: first visualizing the intersections of spheres and then working with equations to check that the visual intuition is correct. The GPS unit measures its distance from a given satellite. The set of all points of distance $d$ from a satellite is a sphere of radius $d$. If the earth is modeled as a sphere, the intersection of those two spheres can be a point or a circle. The case of a point is pictured below (the point at which they meet is on the $x$-axis: 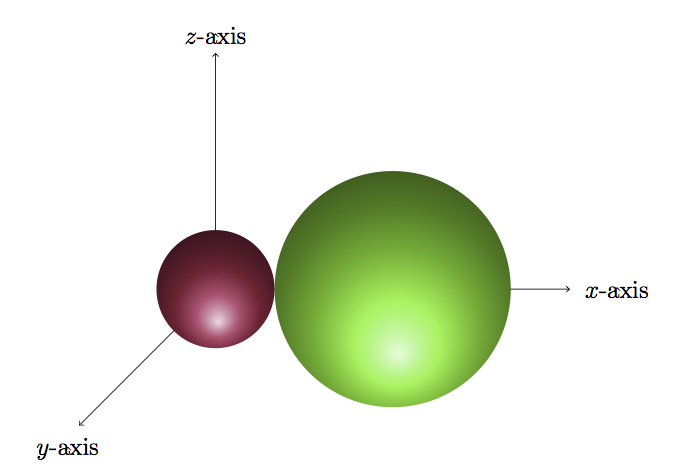 Another possibility is that the two spheres meet in a circle: this is pictured below (here the second sphere has been removed from the picture to show the intersection: the second sphere is located directly underneath the green sphere): 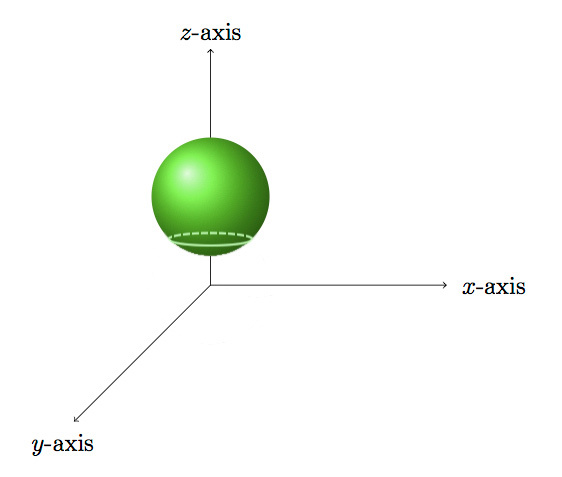 With this information in mind, we can now give examples of the different scenarios presented in this problem.

Here we show algebraically, with the examples used to generate the first two pictures in the first solution, why the intersection of two spheres can be a point or a circle. Then we carry out further algebraic manipulations for part (a). For parts (b) and (c) these equations become more complicated and present a formidable challenge: for part (b) we study a special case and similarly for part (c).

Summarizing the two solutions, the typical situation where the information from three satellites is not enough to locate the GPS would be when the three satellites lie in a line. If they all lie on a line through the center of the earth then the distances from the respective satellites all give the same information and so they will only determine a circle of possible locations for the GPS, unless they are all directly overhead. If the three satellites lie on a plane which goes through the center of the earth then again, unless one of them lies directly overhead, it will not be possible to determine where the GPS is.

Rephrasing the previous paragraph, as long as satellites 1 and 2 have been chosen to limit the possible locations of the GPS to two points $P_1$ and $P_2$, satellite 3 can be selected to be anywhere as long as it is not equidistant from $P_1$ and $P_2$. The set of points equidistant from $P_1$ and $P_2$ forms a plane which contains satellites 1 and 2 and the center of the earth. So it is sufficient to avoid this plane and then satellite 3 will determine the location of the GPS. This is what will usually happen if three locations are chosen at random for the three satellites.