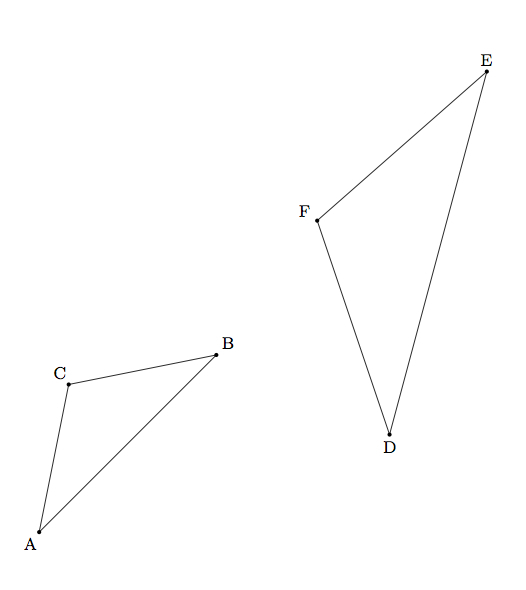 As with all problems where a sequence of similarity transformations is requested, there are many possibilities. Keeping to a translation followed by a rotation and dilation, as in the solution provided, we could instead translate vertex $B$ to vertex $E$ (or vertex $C$ to vertex $F$). A rotation will then align angles $ABC$ and $DEF$ (or $BCA$ and $EFD$) and then a dilation will finish showing the similarity.

The AA criterion for triangle similarity is important in the same way the ASA, SAS, and SSS criteria for triangle congruence are important. Producing an explicit series of transformations exhibiting a similarity can be difficult so when we have knowledge about the angles in triangles this is a very convenient tool.

The main mathematical practices relevant for this task are ''Reason Abstractly and Quantitatively'' (MP2) and ''Construct Viable Arguments and Critique the Reasoning of Others'' (MP3). Mathematical Practice 2 arises in producing the series of transformations exhibiting the similarity and carefully explaining the result of each operation. Mathematical Practice 3 will come up if the teacher has students compare their solutions as there are many possible series of transformations which demonstrate the similarity. If the teacher has access to graphic geometry technology, students could profitably experiment finding different ways to transform these triangles (or any other pair of similar triangles).

Writing down a careful solution can be rather technical, and notationally cumbersome, and so the task assumes a certain familiarity and confidence with similarity transformations. For students who are just beginning to experiment with these transformations, graphic geometry technology would be invaluable to build an intuition for the different steps in the construction. It would also provide students an opportunity to exhibit the similarity in different ways, for example using a sequence of reflections and then a dilation.

We will produce a sequence of translations, rotations, reflections, and/or dilations which transform $\triangle ABC$ into $\triangle DEF$. There are many ways to do this: here we will use a translation to map $A$ to $D$, then a rotation to align two of the sides of the two triangles, and finally a dilation which completes the similarity transformation.

The translation taking $A$ to $D$ is pictured below, with the image of $\triangle ABC$ being denoted by $A^\prime B^\prime C^\prime$. 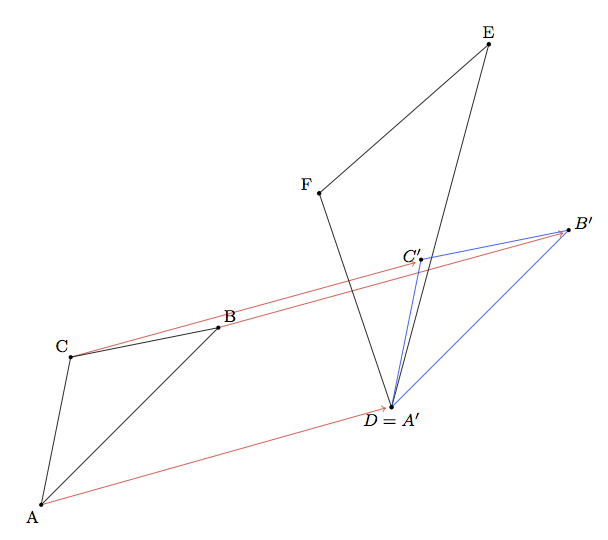 Note that $A^\prime = D$ because the translation is chosen precisely so as to map $A$ to $D$. 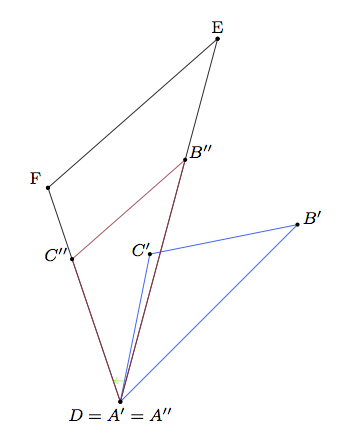