Neglecting the Curvature of the Earth

As it turns out, it is not possible to see Badwater Basin from Mt. Whitney because the Panamint Range blocks the view. But what if there were no obstacles in the way? More precisely:

Standing on top of Mt. Whitney, is it possible to see a point on the surface of the earth 85 miles away, or would the curvature of the earth prevent this?

This task applies geometric concepts, namely properties of tangents to circles and of right triangles, in a modeling situation. The key geometric point in this task is to recognize that the line of sight from the mountain top towards the horizon is tangent to the earth. We can then use a right triangle where one leg is tangent to a circle and the other leg is the radius of the circle to investigate this situation.

As with any serious modeling task, there are several places where we need to make simplifying assumptions. We mention some of these explicitly here: First and foremost, we note the assumption that the earth is perfectly spherical in shape. This is a non-trivial but important simplifying assumption, as geometry on an "oblate ellipsoid" is vastly more complicated. Next, we note that we make use of the fact that Badwater Basin is a large expanse of land at an elevation (282 feet below sea level) negligible compared to that of Mount Whitney (14,505 feet above sea level), rather a single point deep in a ravine. This is what allows us to rephrase the question simply as the visibility of a point 85 miles away. A picture of Badwater Basin can be found here, and may be useful for the instructor and/or the students for visualizing the validity of this assumption.

Hand-in-hand with modeling assumptions are several numerical approximations being made in the solution, giving students ample opportunity to discuss what it means to "attend to precision" (SMP 6). There are several places in the provided solution where we are approximating distances: the radius of the earth, the height of Mt. Whitney, the distance between the two locations. This could lead to a discussion about which digits in the ensuing calculations are meaningful and what effect different approximation choices have on the conclusion we draw. For students who are really interested in this aspect of the problem, a follow-up investigation could be to discuss how small changes in $h$ and $R$ affect $d$. It is a mathematically interesting question, if not particularly crucial to the task at hand.

This task could be used as a follow-up to G-SRT 5 Mt Whitney to Death Valley. The two tasks could be used together to make a more involved modeling task.

This task could be used for a class discussion or as part of a project. One such project was done by Ukiah High School math teacher Jacob Smith, who writes:

I took the students on a walk around campus, discussing asking questions that we could try to answer with math. At the end of the walk, I posed the questions to them "How far away is the horizon?". I then broke them into groups to discuss how they could answer that question, or what was a similar/simpler question that they could answer. They spent the next three days in class working on refining their assumptions and working on their arguments. The last day they put together their posters and we did a gallery walk. I gave each student a stack of post-it notes and instructed them to post any questions they had or comments on the posters and the arguments on them. They were all very excited about reading the comments. The following day (after the weekend) they went back through the comments and we had a discussion about what kind of comments were helpful and what kind weren't. I believe that they will take the comments much more seriously next time.

Posters for two of the students' projects can be found here and here.

We can draw a diagram to visualize the situation. If we assume that the earth is a perfect sphere, then a person standing on a mountain would be elevated a certain distance above the surface of the earth and be looking towards the horizon. We can represent this situation with a circle for the earth and a dot above the circle for the person on the mountain. Drawing in the line of sight of the person on the mountain, we see that the horizon, i.e. the farthest point the person could see, is the point where the line is tangent to the circle (see diagram). 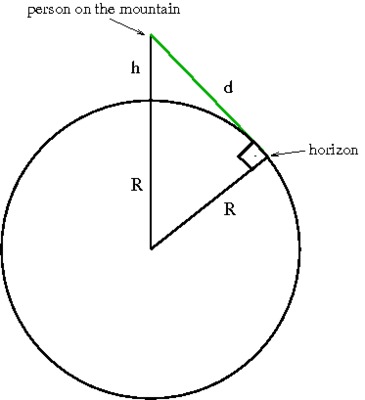 We now label the sides of the triangle as shown in the diagram.

Using the Pythagorean Theorem we have $(R+h)^2=R^2+d^2.$ We can now solve this equation for $d$, the distance along the line of sight from the mountain top to the horizon by solving the equation:

This means that when we are at the top of Mt. Whitney, we can see locations that are up to 148 miles away. Any place farther away would be out of sight because of the curvature of the earth.

Therefore, we can conclude that the curvature of the earth would not prevent us from seeing Badwater Basin from the top of Mt. Whitney.

Neglecting the Curvature of the Earth

As it turns out, it is not possible to see Badwater Basin from Mt. Whitney because the Panamint Range blocks the view. But what if there were no obstacles in the way? More precisely:

Standing on top of Mt. Whitney, is it possible to see a point on the surface of the earth 85 miles away, or would the curvature of the earth prevent this?