High School Number and Quantity
Domain Quantities
Cluster Reason quantitatively and use units to solve problems.
Standard Use units as a way to understand problems and to guide the solution of multi-step problems; choose and interpret units consistently in formulas; choose and interpret the scale and the origin in graphs and data displays.
Task Solar Radiation Model

This task was originally given to students in Santa Rosa. The task and the solution can be adapted to wherever the students live. The task is a seemingly straightforward modeling task that can lead to more involved tasks if the instructor expands on it. Even though the statement of the problem does not give the data source used in the solution, http://cdec.water.ca.gov/cgi-progs/staMeta?station_id=STA, an instructor could give out this information eventually.  An instructor could give only the first sentence and ask the students to come up with interesting questions to investigate and say what information students would be needed to answer them. After the class agrees to explore a question such as  the one about solar energy exploitation in Santa Rosa (maybe with some prodding by the instructor) the instructor can give the link to the solar radiation data and let the students explore the website.

In the solution given below, students investigate the problem using data given graphically . They have to interpret different features of the solar radiation graph such as maximum and minimum values and they recognize and use the quasi-periodic nature of the graph.

We can think of solar radiation as the maximum amount of power that hits a solar panel at any given time. When a solar panel absorbs power over time it creates energy, which is measured in watt-hours (or kilowatt-hours, kWh). Suppose a panel absorbs 5000 watts for 1 hour. Now we have 5kWh of energy. The example that 100 watt-hours is the energy needed to run a 100-watt light bulb for 1 hour is useful and might be familiar. So with 5kWh of energy we could run 50 light bulbs for 1 hour, or 5 light bulbs for 10 hours.

The task naturally brings up more questions: How much energy can a typical roof solar array generate? How much money could a household save by installing a solar array? How long would it take to offset the cost of installation?

To begin to evaluate this statement we need to find data about the solar radiation in Santa Rosa. The California Department of Water Resources maintains a series of sensors at a variety of locations and the data can be found online at http://cdec.water.ca.gov. A quick look through the station list shows a station in Santa Rosa (http://cdec.water.ca.gov/cgi-progs/staMeta?station_id=STA) that collects solar radiation data.

To get a quick idea of the solar radiation we can graph the data for a few days. The graph below shows a 5-day stretch in July. 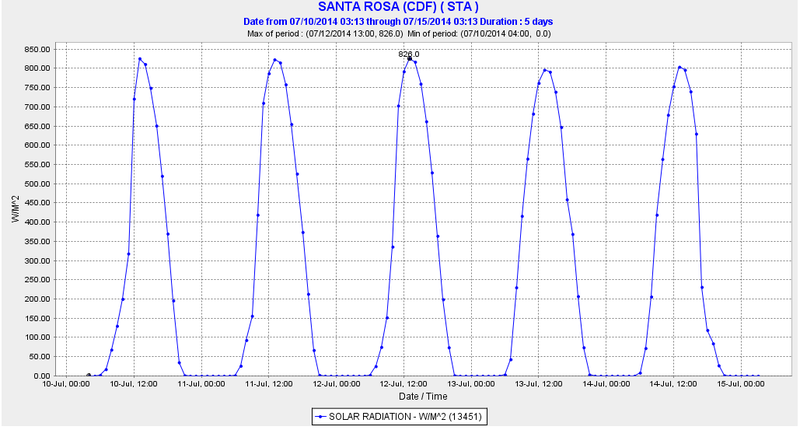 The graph is very regular, almost periodic with maximum solar radiation in the early afternoon around 800 watts per square meter and lows of zero between sunset and sunrise. Zooming in on one day, we can compute the energy generated during one day in kilowatt-hours (kWh), as used in the quote from the internet. 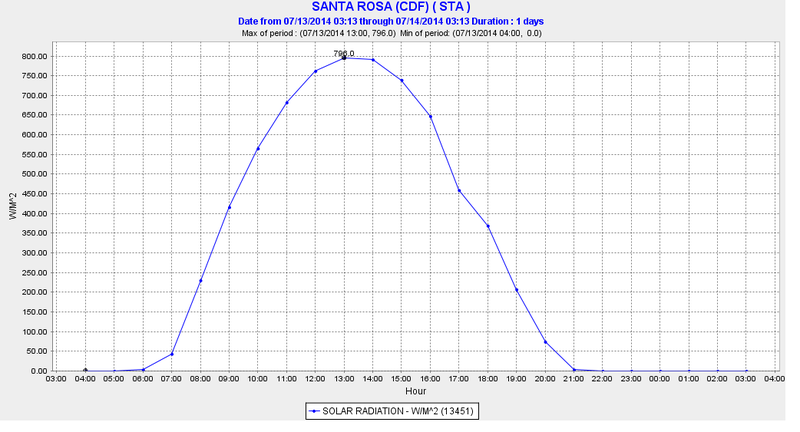 We just computed the energy generated on one July day. We can now look at typical days in every month to see what the average daily solar radiation in Santa Rosa throughout the year is. Using the method where we estimate the average solar radiation and length of the day we have:

So in Santa Rosa the solar energy is between the “definitely makes sense” and “definitely doesn’t make sense” numbers cited in the quote from the website.

Variables that would go into that calculation include:

One might notice, that in our graph, the energy generated by the sun over the course of the day is given by the area under the graph. There are many different ways to approximate this area. We can find out how much energy is represented by one box and count the total number of boxes:

One box has a width of 1 hour and a height of $50\frac{W}{m^2}$, so the area represents 50 watt-hours. There are roughly 131 boxes under the curve. Therefore the total solar radiation during the day is the following:

Another approximation method would be to approximate the area under the curve with a triangle of base 15 hours and height $800\frac{W}{m^2}$, which would lead to the following:

The thinking behind the area methods leads to ideas in calculus. Asking students to analyze graphs and the quantities related by a graph, paying particular attention to the units of the quantities involved, supports the students when they later encounter calculus concepts.