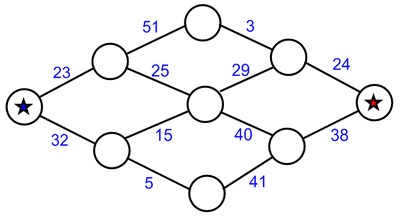 This task is intended to assess adding of four numbers as given in the standard while still being placed in a problem-solving context.

As written this task is instructional; due to the random aspect regarding when the correct route is found, it is not appropriate for assessment.

This puzzle works well as a physical re-enactment, with paper plates marking the islands and strings with papers attached for the tolls.

Technically, paths that run from right to left along some bridges could be considered as well (for example, 32 + 5 + 41 + 40 + 29 + 24). However, for this particular example, such paths can be ignored since students will find a cheap enough path by only investigating paths that run from left to right. One might be tempted to modify the problem by having the student start with 99 coins, and ask if it is possible to reach the red island. However, such a modification would be inappropriate since a mathematically valid solution would require that the student consider all paths, including those that cross some bridges from right to left. 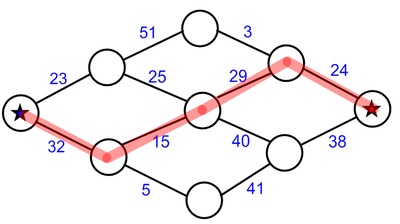