Grade 4
Domain Geometry
Cluster Draw and identify lines and angles, and classify shapes by properties of their lines and angles.
Standard Classify two-dimensional figures based on the presence or absence of parallel or perpendicular lines, or the presence or absence of angles of a specified size. Recognize right triangles as a category, and identify right triangles.
Task What is a Trapezoid? (Part 1) 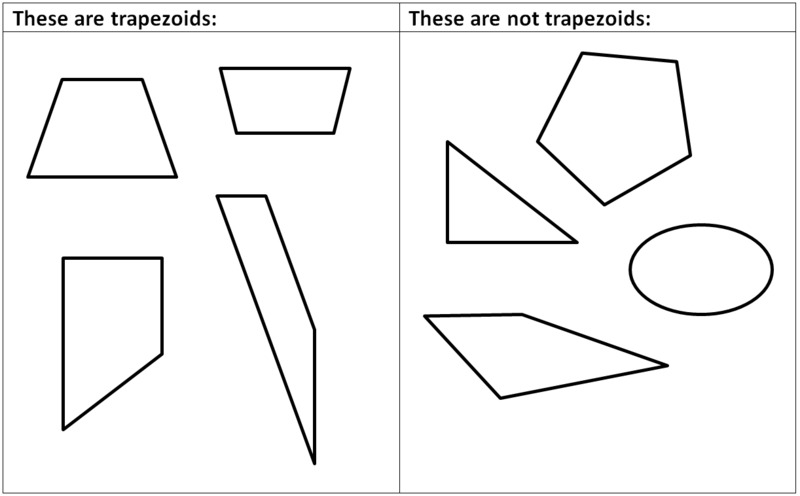 The purpose of this task is for students to articulate a definition for a trapezoid. There are two competing definitions for "trapezoid":

Sometimes people say trapezoids "have one pair of opposite sides parallel," which leaves it ambiguous whether there can be more than one or not. The second part of the task pushes students to be clear about which version they intend. Because of the care students need to take with definitions, this task draws heavily on MP6, Attend to precision.

After students have articulated definitions for themselves or with a partner, the class should discuss the definition together. The class should decide on a single definition that they all agree on, as the point of having clearly articulated definitions is that we all know we are talking about the same thing. While both definitions are legitimate, the benefit to the inclusive definition is that any theorem proved true for a trapezoid is also true for a parallelogram. Furthermore, in their study The Classification of Quadrilaterals (Information Age Publishing, 2008), Usiskin et al. conclude,

Note: if students come up with different definitions, that is fine initially. However, in order to be able to discuss mathematical ideas going forward, the class should settle on one of these versions and go from there. See note in the commentary encouraging the version of the definition that includes parallelograms.