Grade 5
Domain Number and Operations in Base Ten
Cluster Understand the place value system.
Standard Explain patterns in the number of zeros of the product when multiplying a number by powers of 10, and explain patterns in the placement of the decimal point when a decimal is multiplied or divided by a power of 10. Use whole-number exponents to denote powers of 10.
Task Marta's Multiplication Error 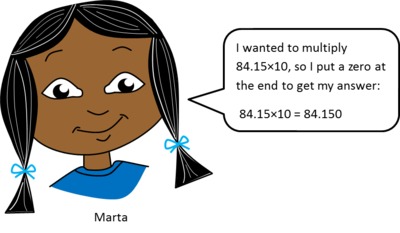 This task highlights a common misconception among students deriving the rules for multiplying a number by a power of 10. Many students correctly recognize that multiplying a whole number by a power of 10 will result in a product with as many 0s at the end as were in the power of 10. When students transition to multiplying decimals by powers of 10, they often generalize this "rule" without thinking about the value that results. It is important to create dialogue around this misconception, especially during the initial stages of deriving rules for multiplying and dividing numbers by powers of 10. This task could be used to ground a classroom discussion during the first day of multiplying decimals by powers of 10. It would also be appropriate for a formative assessment to check for student understanding of this pivotal transition from whole number reasoning to decimal reasoning.

The Standards for Mathematical Practice focus on the nature of the learning experiences by attending to the thinking processes and habits of mind that students need to develop in order to attain a deep and flexible understanding of mathematics. Certain tasks lend themselves to the demonstration of specific practices by students. The practices that are observable during exploration of a task depend on how instruction unfolds in the classroom. While it is possible that tasks may be connected to several practices, only one practice connection will be discussed in depth. Possible secondary practice connections may be discussed but not in the same degree of detail.

This particular task helps to illustrate Mathematical Practice Standard 3, Construct viable arguments and critique the reasoning of others. Students are asked to critique the reasoning of Marta’s claim that when you multiply 84.15 X 10, you only have to add a zero at the end to get the answer. This type of task provides students with an opportunity to distinguish a reasonable explanation from that which is flawed.  If there is a flaw in the argument they can further explain why it is flawed. To decide if Marta’s claim is true or false, students will have to think critically about the “rules” they used when multiplying whole numbers by 10.  By adding a zero to 84.15, the value stayed the same.  If Marta had shifted the decimal one place to the right, each digit would represent ten times its original value.  Students must recognize that Marta’s misunderstanding comes from an understandable, but erroneous student line of thinking; if students use this rule for whole numbers, then they are likely to try to apply it to decimals as well. Students working on this task should see that while Marta’s rule does work for whole numbers being multiplied by powers of 10, it will not work for decimals being multiplied by powers of 10 for the reasons stated in the solution. This process is very clearly explained using expanded notation and the distributive property in the solution set.  Learning how to argue whether a claim is true or false concisely and precisely must become a routine part of a student’s mathematical work as should the ability to construct an argument around a correct answer.  These are both skills practiced in this task.

Marta is mistakenly trying to continue a pattern dealing with multiplying whole numbers by powers of 10: the product will have the same digits as the whole number followed by the same number of 0s as the power of 10. Marta tried to place a 0 after 84.15 in her problem to continue this pattern, but placing a 0 in the thousandths place did not change the value of 84.15. Instead, Marta can shift the decimal one place to the right so that each digit occupies ten times its original place. Her correct answer is 841.5. Another way of finding the product of 84.15 and 10 is to rewrite 84.15 in expanded notation and use the distributive property:

Using expanded notation also highlights that the place value of each digit needs to be multiplied by a factor of 10. It should be noted that the digit 8 in the original expression represented 8 tens, but will be 8 hundreds in our product. In Marta’s solution, the 8 still only represents 8 tens and the magnitude of the number has not changed.