High School Functions
Domain Interpreting Functions
Cluster Interpret functions that arise in applications in terms of the context.
Standard Calculate and interpret the average rate of change of a function (presented symbolically or as a table) over a specified interval. Estimate the rate of change from a graph.
Task 1,000 is half of 2,000

This real-life modeling task could serve as a summative exercise in which many aspects of students' knowledge of functions are put to work. Students must:

As in the list above, opportunities to model the standards for mathematical practice are abundant, ranging from modeling with mathematics, to using tools (to, say, plot data points), to expressing regularity in repeated reasoning as they generalize from sample computations of $S(t)$ to a general formula.  For example, students will need to attend to precision as they formulate a definition of $B$ (for example, deciding between $B(t)\approx N(t+1)-N(t)$ or $B(t)\approx N(t)-N(t-1)$), making sure to attend to the domain of $B$, etc.  It would be worth encouraging discussion between students on this front.

Similarly, to emphasize modeling, teachers should encourage students to be thoughtful and creative in answering the last part.  Students might conclude that since $S(32)$ is much larger than $R(32)$, that the team is unlikely to succeed in meeting its deadline, or they might argue that the comparatively astronomical value of $B(6)$, representing the work done in March 2012, gives credence to the team's potential to accomplish heroic feats. 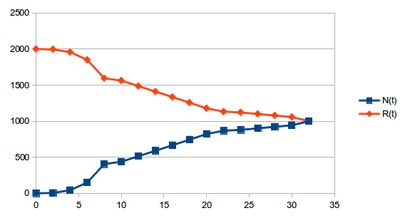 (b)  Since $B(t)$ is the number of problems produced in the $t$-th month, we have the algebraic relation $B(t)=N(t)-N(t-1)$ for $t\geq 1$.  Unfortunately, this does not help in computing values of $B(t)$, since we never have data for $N(t)$ for two consecutive months.  To make use of the data that we do have, we could approximate $B(t)$ by taking the amount of items generated between $t-2$ and $t$ (instead of $t-1$ and $t$) and dividing by 2, leading us to the approximation

representing the average rate of change over that time interval.  Other reasonable approximations might include $B(t)\approx \frac{N(t+2)-N(t)}{2}$ or $B(t)\approx \frac{N(t+2)-N(t-2)}{4},$ representing average rates of change of $B(t)$ over the intervals $[t,t+2]$ and $[t-2,t+2]$ respectively.  We'll use the approximation centered above for computing values.  For example, we get

Some notable values of $S(t)$ would be $S(0)$, the average production rate needed from the start, $S(32)$, the average production rate needed at the end of the recorded data, and times when it appears that $S(t)$ is exceptionally large, small, or changing quickly.  For convenience we include below all the calculable values of $S(t)$, in tasks per month, rounded to two decimal places.

Not obvious from the original data is the extent to which $S(t)$ is almost always increasing as a function of time.  Note the exception of $t=8$, the time following the 2-month span of exceptional productivity as noted in the previous part of the solution.  Note also that IM has produced 1000 problems in 32 months, averaging $31.25$ problems per month. So it is worth remarking that IM will have to work $\frac{62.5}{31.25} = 2$ times as quickly as it did in its first 32 months in order to achieve its goals.

(d)  There is no right answer to this question, but lots of relevant information that could be used in drawing a conclusion.  As noted in part (c), the track record seems to show that IM needs to increase its production significantly in order to meet its quota, potentially justifying an answer of "No." On the other hand, IM has also shown the ability to give drastic production increases as noted in part (b), in which the value of approximately 118.5 for $B(t)$ achieved during March 2012  seems to be more than sufficient to cover the value of $R(2)=62.5$ demanded for the last 16 months until the deadline. Perhaps the largest question that remains to be answered is whether or not that level of productivity can be reached again -- other information that might be useful in this regard is the extent to which IM has developed a national community of problem-producers large enough and capable enough to complete the task. It would also help to have a corporate jet.