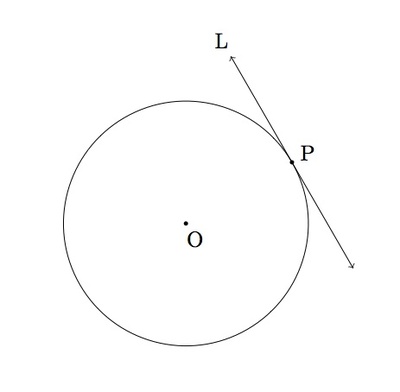 This task presents a foundational result in geometry, presented with deliberately sparse guidance in order to allow a wide variety of approaches. Teachers should of course feel free to provide additional scaffolding to encourage solutions or thinking in one particular direction. We include three solutions which fall into two general approaches, one based on reference to previously-derived results (e.g., the Pythagorean Theorem), and another conducted in terms of the geometry of rigid transformations. The foundational nature of the task likely renders the task inappropriate for assessment.

A first approach to this problem is to reason directly from past results in plane geometry. In the first solution, we reference in particular the fact that if $A$ is a point not a line $M$ and $B$ is the closest point on $M$ to $A$ then segment $\overline{AB}$ meets $M$ perpendicularly. (If so desired, a task devoted to discovering that relationship is presented in the task with name ''Shortest segment from a point $P\,$ to a line $L$.'') An appealing aspect of this solution is that it requires close focus on the definition of a circle. If $O$ is the center of a circle of radius $r$, then points of the plane fall into one of three categories:

By assumption the tangent line to the circle at $P\,$ contains only one point from the second category above. The essence of the argument presented here is that the tangent line in question cannot contain any points from the first category because this would force the line to meet the circle in a second point.

The second solution under this approach fills in some of the details of the first solution. In particular, it uses the Pythagorean Theorem and a proof by contradiction to establish that the tangent line and radius meet perpendicularly. The teacher may wish to go over the logic of arguments by contradiction separately and make sure the students are comfortable with this logic.

A second approach to the problem at hand is to use the idea of rigid motions of the plane. The argument here is independent of the Pythagorean theorem (which is required in the previous approach) and shows some of the power of the theory of rigid motions.

The instructor may wish to recall visually the effect of reflections of the plane as well as the mathematical definition: reflection of a point $P\,$ about a line $L$ sends $P\,$ to the point $Q$ so that $L$ is the perpendicular bisector of segment $\overline{PQ}$. This definition applies to points $P\,$ that are not on $L$: if $P\,$ is on $L$ then the reflection of $P\,$ about $L$ is $P$. Students may be encouraged to experiment with some different lines, including the tangent line in question, to develop an intuition. After the experimenting, students should have a sense that the only lines which are preserved under this reflection are $L$ itself and those lines which are perpendicular to $L$. It is vital that they have a firm grasp of this since the logic of this argument is to use this fact in order to conclude that $L$ is perpendicular to segment $\overline{OP}$.

We argue from the fact that the shortest segment from a point $P\,$ not on $L$ to a line $L$ is perpendicular to $L$. It remains only to argue that the radius $\overline{OP}\,$ is the shortest line segment from $O$ to the line $L$. 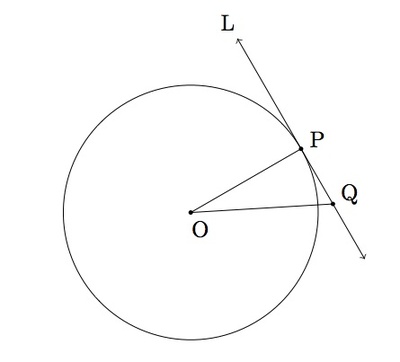 This is a more detailed version of the previous solution, where (a) we argue more carefully that the point $P$ is the closest point of $L$ to $O$, and then (b) use the Pythagorean Theorem to establish that $L$ is perpendicular to the radius $\overline{OP}$.

We consider the reflection $r$ over the line $\overleftrightarrow{OP}$ containing the diameter of the circle through $P$. In the picture below are a point $Q$ on $L$ other than $P$, and its reflection $r(Q)$. Note that since they lie on the diameter itself, we have $r(O)=O$ and $r(P)=P$. We argue that as illustrated, the reflection of $Q$ must lie on $L$, and more generally that $r(L)=L$. 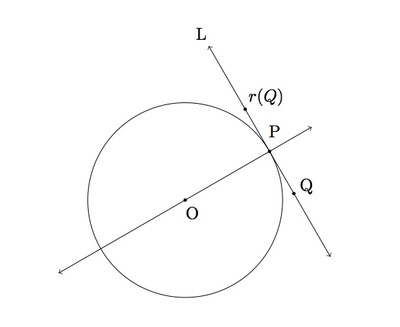