Congruent angles made by parallel lines and a transverse

In the picture below $\ell$ and $k$ are parallel: 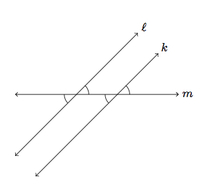 Show that the four angles marked in the picture are congruent.

The goal of this task is to prove congruence of vertical angles made by two intersecting lines and alternate interior angles made by two parallel lines cut by a transverse. Students will be familiar with these results from eighth grade geometry and here they will provide arguments with a level of rigor appropriate for high school. The solution (for alternate interior angles) uses properties of rigid motions and so it is assumed that students have already studied these. Two different arguments are provided, one using rotations and one using translations.

We begin by showing that the pair of vertical angles where $k$ and $m$ meet are congruent. For this we mark several points on the diagram: 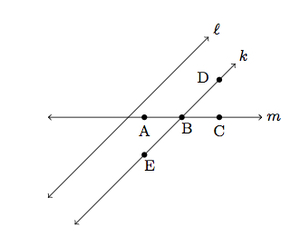 To show that all four angles are congruent, it is now sufficient to show, in the picture below, that $m(\angle GBE) = m(\angle BGF)$. 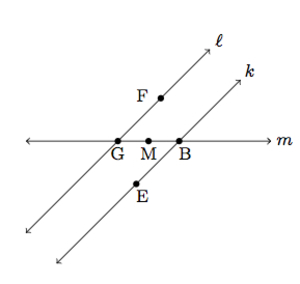 Here $B$ and $E$ are the same points as in the picure above and we have added points $F$ and $G$ as well as the midpoint $M$ of $\overline{BG}$. A 180 degree rotation of the plane about $M$ maps $B$ to $G$ and $G$ to $B$ since $M$ is the midpoint of $\overline{BG}$. If $t$ is the line parallel to $k$ and $\ell$ through $M$ then $t$ is mapped to itself by the 180 rotation with center $M$. The rotation maps parallel lines to parallel lines so this means that $k$ must map to the line through $G$ and parallel to $t$, that is $k$ maps to $\ell$. Similar reasoning shows that $\ell$ maps to $k$. This means that the 180 degree rotation with center $M$ interchanges $\angle GBE$ and $\angle BGF$, making these two angles congruent. Combining our congruent vertical angles and congruent alternate interior angles, we have shown that all four angles in the picture are congruent.

Congruent angles made by parallel lines and a transverse

In the picture below $\ell$ and $k$ are parallel:

Show that the four angles marked in the picture are congruent.