High School Geometry
Domain Congruence
Cluster Make geometric constructions
Standard Make formal geometric constructions with a variety of tools and methods (compass and straightedge, string, reflective devices, paper folding, dynamic geometric software, etc.). <span class='clarification'>Copying a segment; copying an angle; bisecting a segment; bisecting an angle; constructing perpendicular lines, including the perpendicular bisector of a line segment; and constructing a line parallel to a given line through a point not on the line.</span>
Task Locating Warehouse

You have been asked to place a warehouse so that it is an equal distance from the three roads indicated on the following map. Find this location and show your work. 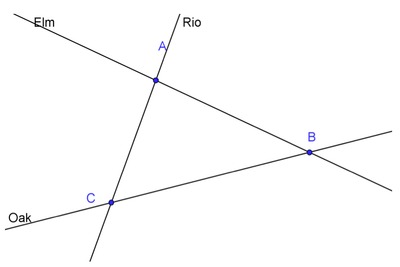 This task can be implemented in a variety of ways. For a class with previous exposure to the incenter or angle bisectors, part (a) could be a quick exercise in geometric constructions,. Alternatively, this could be part of a full introduction to angle bisectors, culminating in a full proof that the three angle bisectors are concurrent, an essentially complete proof of which is found in the solution below.

We note also that the geometric construction aspect of the proof could be nicely replaced with an exploration involving the use of dynamic geometry software. Dragging the placement of the three initial roads in to a variety of configurations helps develop student's intuition for the incenter construction.

Now we show the concurrence of the three angle bisectors: It is easy to see that the distance from the warehouse $W=WH$ to Rio equals the distance from $W$ to Oak. Namely, draw perpendiculars from $W$ to both Rio and Oak, with respective intersection points $X$ and $Y$. The triangles $\triangle WXC$ and $\triangle WYC$ are congruent since they are right triangles with $\angle WCX = \angle WCY$ and sharing side $WC$. So $WX=WY$. Similarly, drawing a perpendicular to Elm through $W$ meeting Elm at $Z$, we have $WY = WZ$. Combining the two equalities, we learn that $WX = WZ$, so that $W$ is on the angle bisector and the three angle bisectors are concurrent.

You have been asked to place a warehouse so that it is an equal distance from the three roads indicated on the following map. Find this location and show your work.