The purpose of this task is to engage students in geometric modeling, and in particular to deduce algebraic relationships between variables stemming from geometric constraints. The modelling process is a challenging one, and will likely elicit a variety of attempts from the students. Teachers should expect to spend time guiding students away from overly complicated models. Similarly, the task presents one solution, but alternatives abound: For example, students could imagine slicing the roll along a radius, unraveling the cross-section into a sequence of trapezoids whose area can be computed. 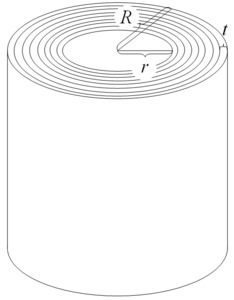 We begin by labeling the variables, for which the above diagrams may be useful. Let $t$ denote the thickness of the paper, let $r$ denote the inner radius, let $R$ denote the outer radius and let $L$ denote the length of the paper, all measured in inches. We now consider the area $A$, measured in square inches, of the annular cross-section displayed at the top of the first image, consisting of concentric circles. Namely, we see that this area can be expressed in two ways: First, since this area is the area of the circle of radius $R$ minus the area of the circle of radius $r$, we learn that $A = \pi(R^2-r^2)$.

Second,iIf the paper were unrolled, laid on a (very long) table and viewed from the side, we would see a very long thin rectangle. When the paper is rolled up, this rectangle is distorted, but -- assuming $r$ is large in comparison to $t$ -- the area of the distorted rectangle is nearly identical to that of the flat one. As in the second figure, the formula for the area of a rectangle now gives $A=t\cdot L$.