Inscribing a circle in a triangle I 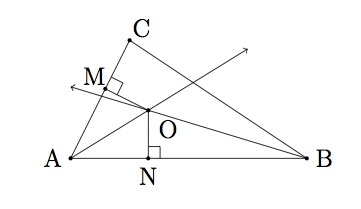 This task shows how to inscribe a circle in a triangle using angle bisectors. A companion task, ''Inscribing a circle in a triangle II'' stresses the auxiliary remarkable fact that comes out of this task, namely that the three angle bisectors of triangle $ABC$ all meet in the point $O$. In order to complete part (d) of this task, students need to know that the tangent line to a circle at a point $p$ is characterized by being perpendicular to the radius of the circle at $p$.

This task is primarily intended for instruction purposes but parts (a) and (b) could be used for assessment. The teacher is encouraged to draw many different triangles both to provide a broader context for the problem and to see where the inscribed circle lies depending on the shape of the triangle. If students no how to bisect an angle and draw the segment from a point to a line, meeting the line in a right angle, then they could perform the entire construction with straightedge and compass. This particular construction has a great reward at the end, namely being able to produce the inscribed circle inside the triangle.

Inscribing a circle in a triangle I