The purpose of this task is to examine angles of triangles whose vertices have specific integer coordinates. The angles examined are formed by three points with integer coordinates, two of which are on the $x$-axis. There are many such angles as the only constraint on the non-horizontal ray is that it belongs to a line with rational slope. It turns out that the impact of that slope being rational is that it makes a 60 degree angle, with these conditions, impossible, and so no equilateral triangle exists satisfying these constraints. Students will need to either know or be able to calculate the length of the altitude of an equilateral triangle or know the sine and cosine of a 60 degree angle. This can be done via knowledge of trigonometric functions or with the Pythagorean Theorem. The teacher may need to provide guidance: a good starting point would be to draw some triangles, as in the solution, and determine whether or not these special cases are equilateral.

The task can be naturally extended to show that there is no equilateral triangle in the plane whose vertices have integer coordinates: in other words, the answer to the problem is the same without the assumption that two of the vertices are on the $x$-axis. An argument for this more general problem is presented using sum and difference formulas for the tangent function. This is a plus standard and the formulas will likely need to be given. It is not the precise formulas themselves, however, but rather their structure which is vital: this task can be viewed not only as an application of these formulas but also a motivation to investigate them.

The idea for this task came from an Albuquerque Math Teachers' Circle meeting on October 1, 2013.

Suppose there is an equilateral triangle $ABC$ satisfying the given hypotheses. We can make a horizontal translation so that $A = (0,0)$ and we will assume, for simplicity, that $B$ lies on the positive $x$-axis. Below is a picture of an example where the $y$-coordinate of $C$ is positive: 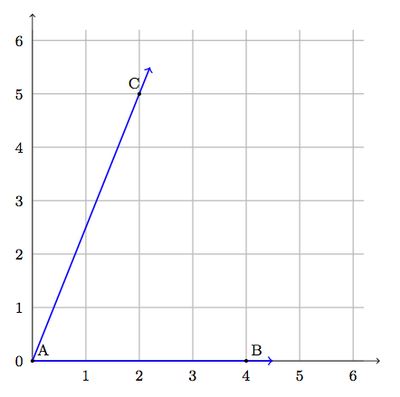 Suppose $m(\angle A) = 60$. We can calculate the trigonometric functions for $\angle A$ by making a right triangle as pictured below: 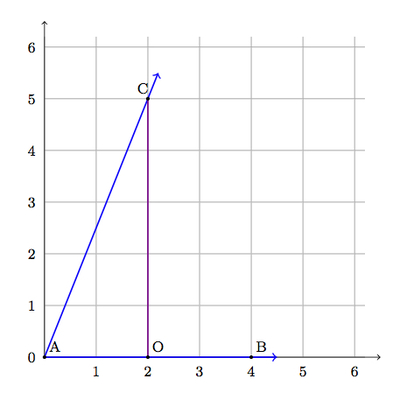 Suppose there is an equilateral triangle $ABC$ satisfying the given hypotheses. We can make a horizontal translation so that $A = (0,0)$ and we will assume, for simplicity, that $B$ lies on the positive $x$-axis. In the picture $\overleftrightarrow{CO}$ is perpendicular to $\overleftrightarrow{AB}$. 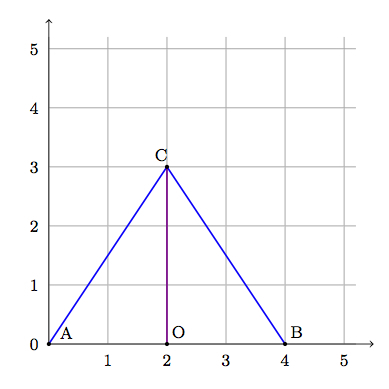 Below is a picture showing a specific triangle to which we can apply the sum formula given above: 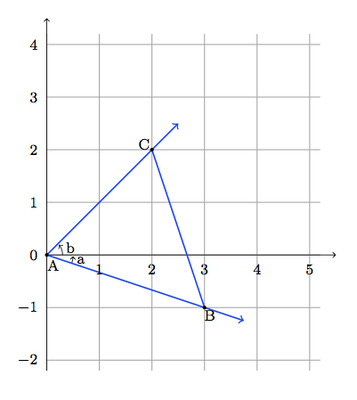 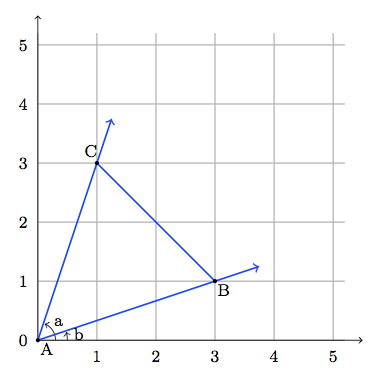