High School Functions
Domain Interpreting Functions
Cluster Interpret functions that arise in applications in terms of the context.
Standard For a function that models a relationship between two quantities, interpret key features of graphs and tables in terms of the quantities, and sketch graphs showing key features given a verbal description of the relationship. <span class='clarification'>Key features include: intercepts; intervals where the function is increasing, decreasing, positive, or negative; relative maximums and minimums; symmetries; end behavior; and periodicity.</span>
Task Containers

Here are 6 containers that are being filled with water at a constant rate, and 9 graphs that represent the height of the water in a container as a function of the volume of water in the container. 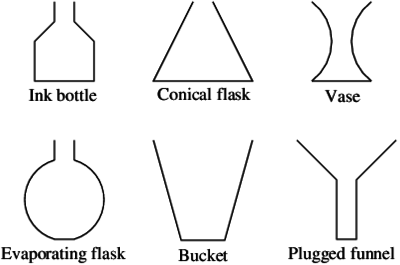 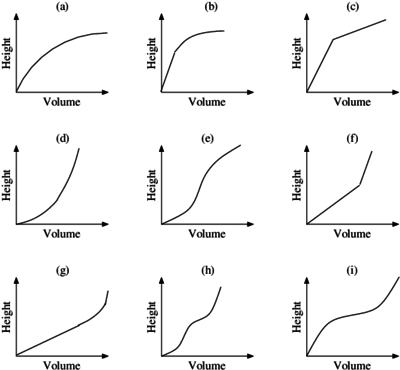 The purpose of the task is to help students think about how two quantities vary together in a context where the rate of change is not given explicitly but is derived from the context. Students relate the width of the container to how quickly or slowly the height changes as water is added at a constant rate. In all cases the height increases as water is added. In order to distinguish the graphs for different containers, students have to think about the rate at which the height of the water increases as the volume increases. In the classroom, teachers could ask students to work in pairs to construct arguments for matching the containers to the graphs and creating the additional three containers. After sufficient time, pairs can form teams to compare their results and critique each other’s reasoning. Students have the opportunity to reason abstractly and quantitatively, going from the physical context to the mathematical model and back again to decide how quickly or slowly height increases as the volume increases. The teacher can extend the task in several ways:

The Bucket and the Conical Flask do not have any part with constant cross-section, so the corresponding graphs do not have any part that is  linear. This rules out graphs (b), (c), The Bucket widens as you go up, so the height increases quickly at first and then slowly, corresponding to graph (a). Similarly, the Conical flask fills slowly and then quickly as shown in graph (d).

The Vase fills slowly then quickly then slowly, which is shown in graph (e) with the curve starting out less steep, then getting steeper, and then getting less steep again.

The change in height for increase in volume of the Evaporating flask will be fast, slow, fast again, and then constant. The constant rate of change will correspond to steep linear segment on the graph to show that the top of the flask fills quickly. The graph which shows this best is (i).

A container for graph (f) will fill slowly and then quickly, as shown in the container below.

Here are 6 containers that are being filled with water at a constant rate, and 9 graphs that represent the height of the water in a container as a function of the volume of water in the container.