The first three steps of twoÂ visual patterns are shown below. 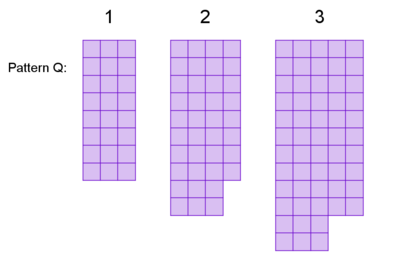 This task belongs to aÂ series of threeÂ tasks that has students process a sequence of tile figures with the property that the $n$-th figure in the sequence has $f(n)$ tiles, for some quadratic function $f$. Students are asked to analyze the functions in the context of questions about the sequence of figures, a process which involves manipulating the quadratic expressions into different forms (identifying square roots at first, then completing the square in the third task). With solving quadratics, there can beÂ an impulse to put everything in standard form and just use the quadratic formula. However, seeing structure is emphasized in the standards because of how it connects and helps inÂ understanding many foundational concepts, and these tasks develop the ability to see structure when working with quadratic expressions and equations.Â

That the domain of these quadraticÂ functions isÂ the set of positive integers provides an interesting wrinkle which students might not be used to thinking about in the setting of quadratic functions.Â The functions roughly increase in complexity through the threeÂ tasks, with the intent that the techniques learned in each will be used and expanded in the subsequent tasks.Â The other tasks in the sequence are Quadratic Sequence 1Â and Quadratic Sequence 2.

Ideally, students will have had some experience working with visual patterns prior to this task. If not, students might benefit from additional questions to familiarize themselves with the idea. For example, they might be asked to draw the next step in the pattern.Â Or students could be asked to discuss how they "see" the pattern growing (here is a good primerÂ onÂ what that might look like.) OrÂ they could be asked to evaluate p(1) and explain its meaning in terms of the number of tiles in Pattern P.

The purpose of this task is to motivate solving a quadratic equation where the variable of interest, $n$, can not be isolatedÂ directlyÂ by "undoing" operations. Instead, students must tackle solving these equations in some other way. In previous tasks in the sequence, students could "undo" a squaring operation. So a natural way forward might be to think about how they could rewrite the equation with one sideÂ a perfect square, and that is the direction shown in the solution. This task could be used to motivate learning a more general procedure for solving by completing the square.

The first three steps of twoÂ visual patterns are shown below.